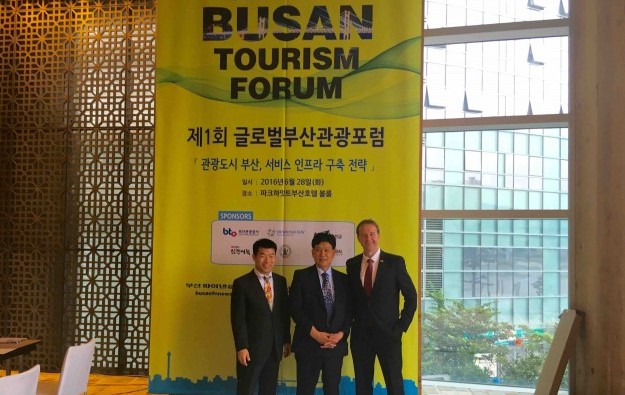 The potential development of a casino resort in the South Korean port city of Busan could be an “attractive catalyst to tourism” if pursued in partnership with “international experienced operators”, says a Macau academic.

But Glenn McCartney (pictured right), assistant professor of hospitality and gaming at the University of Macau, warned that simply looking at current aggregate numbers of mass-market visitors to Busan as an indicator for the likely success of a casino resort would be a “flawed” approach. There was a “need to cite quality tourism based on spending power across gaming and non-gaming products as well as length of stay,” said Mr McCartney.

His comments came at the 1st Global Busan Tourism Forum held in the city at the end of last month.

In mid-June the Korea Economic Daily newspaper reported that representatives of international casino developer Las Vegas Sands Corp had visited Busan, scouting it as a possible location for a casino resort. But the outlet added that the casino group – which already has Asian operations via Macau and Singapore – wanted to ensure that local gamblers would be permitted to use the gaming facilities.

Las Vegas Sands has previously mentioned plans for a US$10-billion casino resort in South Korea – with the hope that entry to locals would be allowed, namely on similar terms to those granted to Singapore’s casinos by the Singapore government. A number of investment analysts have noted however that allowing locals to gamble in South Korean casinos other than Kangwon Land would require adjustments to the existing regulatory framework – even if there were some forms of social safeguard applied, such as an entry levy.

Mr McCartney discussed – during his session at the tourism forum – China’s outbound tourism market with particular reference to South Korea’s semi-autonomous Jeju Island. The island is popular with mainland Chinese holidaymakers and offers them visa-free entry if they arrive directly by international flight or international ferry or cruise ship. Mainland Chinese visitors to other parts of South Korea need a visa.

Mr McCartney noted that Jeju had attracted the attention of investors that also have interests in the Macau gaming market. In late June it was announced that Macau VIP gambling room investor Iao Kun Group Holding Co Ltd was to acquire the Jeju Sun Hotel and Casino on Jeju Island from Philippines casino operator Bloomberry Resorts Corp.

Regarding potential new casino developments in South Korea, and Busan in particular, Mr McCartney stressed the importance of integrating them in a tourism master plan, and of getting consensus from the host community. He cited as an example Singapore’s efforts prior to the award of two casino licences in the city-state in 2007.

He also noted that the market environment had to be “attractive to investors and operators to achieve a comfortable return on investments”.

Aaron Fischer, head of consumer and gaming research at brokerage CLSA Ltd noted – in a speech at the Global Gaming Expo (G2E) Asia casino trade exhibition and conference held in Macau in May – that the return on invested capital for new Macau casino resort projects could still average about 17 percent despite the recent headwinds in the local gaming sector.

In 2014 – the most recent figures available in English via official sources – Busan recorded 3.02 million visitor arrivals. That is according to data from Busan Metropolitan City. The same year, Macau received approximately 31.53 million visitors.

An article in Macau’s draft new gaming law, to create a mechanism to dissolve an existing gaming concession in the event it was not granted a new licence after the current six concessions... END_OF_DOCUMENT_TOKEN_TO_BE_REPLACED