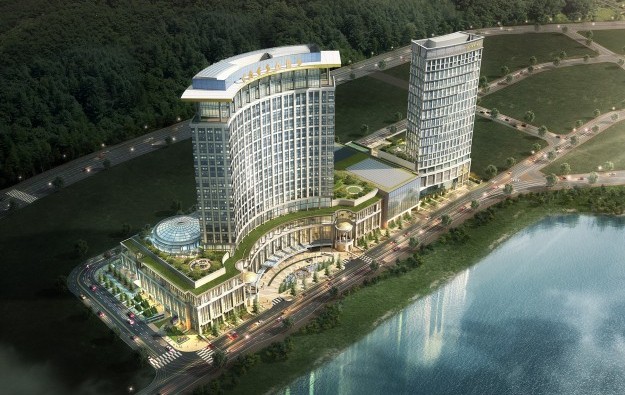 The scheme, being co-developed with Hong Kong-listed Guangzhou R&F Properties Co Ltd according to a December 2016 filing by the latter, is at Midan City in the northeast part of Yeongjong Island, also home to Incheon International Airport, the main air hub serving the South Korean capital Seoul. Excluding financing-related costs, the firm is still maintaining a previously-stated US$700-million budget for the Caesars Korea project, Mr Shen told GGRAsia in an interview on the sidelines of G2E Asia 2018.

The official website of the Caesars Korea project also mentions 2021 as the year for its “grand opening”. “Our investment is we believe is right-sized for the type of opportunity that is available to us as a foreigner-only casino,” Mr Shen remarked to us.

“The concern is always – it is a foreigner-only casino; it doesn’t have domestic [gambling customers] in the way Kangwon Land has tons and tons of visitors. I think our model is one where we want to emphasise non-gaming anyways: the non-gaming capabilities, the non-gaming offers that we have to showcase,” he added. Amongst South Korea’s 17 casinos, Kangwon Land is the only casino where the country’s nationals are allowed to gamble.

According to Mr Shen, the Caesars Korea project will offer approximately 750 units of accommodation, including suites, villas and serviced residences. The non-gaming features of the project include a conference centre, an indoor theatre, an amphitheatre, shops, a spa and a “pool experience”.

Speaking of the intended gaming mix for the Incheon project, Mr Shen said that his firm was targeting to achieve a “balanced” gaming revenue mix.

“Incheon airport is a really, really busy airport with all kinds of flight traffic from many parts of the world. So that’s part of the traffic that we want to capitalise on,” Mr Shen said, mentioning that Chinese and Japanese visitors are amongst the sources the Korean casino resort scheme would target at.

“In regards to VIP and mass [play], I think we also want to have a kind of balanced view and not be reliant on VIPs,” the Caesars executive added. “…I think the premium mass segment as it exists in markets in other places in Asia certainly is going to be an attractive segment as well.”

South Korea’s gaming market will continue to face regional competition for the spending of players from northern China given the likely progress of its neighbour Japan’s casino legalisation, as well as the expansion of the casino resort Tigre de Cristal in the Russian Far East, Fitch Ratings said in its latest gaming industry report, “All In: Global Gaming Handbook”.

But Caesars’ Mr Shen told us: “If you use general visitation as a proxy, it’s not a zero-sum game. The outbound Chinese visitation to [South] Korea and Japan has continued to grow, and grow very strongly in the last decade or so, with only a couple of exceptions.”

He added: “I don’t think it is ever a question that one has to drop from the other to grow. There is enough demand in the market for both [South Korea and Japan] to be successful.”

Macau’s health authorities said on Sunday that they would require all people wishing to enter the city’s casinos not only to have their body temperature measured and to display a... END_OF_DOCUMENT_TOKEN_TO_BE_REPLACED