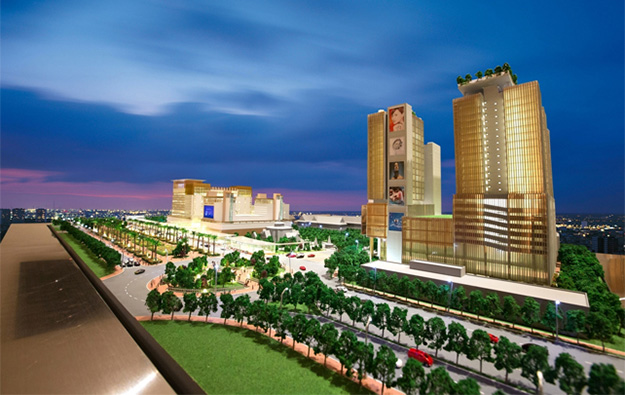 The TSCLK Complex – also known as “Naga2″ – is attached to NagaWorld, a casino property located in Cambodia’s capital Phnom Penh.

“I anticipate [the Naga2 opening] will be in October,” Mr McNally said.

NagaCorp stated in a Monday filing that the property was undergoing fit-out and was expected to be operational in the fourth quarter of 2017.

Naga2 (pictured in an artist’s rendering) will be connected to NagaCorp’s existing NagaWorld casino resort via an underground shopping mall called NagaCity Walk. The latter opened in August 2016.

“The group believes that the opening of Naga2 with provision of ancillary entertainment facilities will enhance NagaWorld’s appeal to both the mass market and VIP market across the region and further cement NagaWorld as the entertainment centre in Mekong region,” NagaCorp said in its Monday release.

Naga2 will feature gaming facilities with capacity for up to 300 tables and 500 slot machines, according to NagaCorp’s website. It will also include 38 VIP rooms. The property will offer additional accommodation capacity.

“Looking further ahead, and in the context of having 850 new hotel rooms at Naga2, we expect the company to embark on a wholesale (and much needed) refresh of NagaWorld’s hotel rooms and public spaces,” Union Gaming Securities Asia Ltd analyst Grant Govertsen wrote in a Tuesday note. NagaWorld opened for business in 1995.

He added that Naga2 would likely benefit from the increased number of visitors from China to Cambodia and from improved air connectivity between the two countries.

NagaCorp posted a 20.3 percent year-on-year increase in net profit to US$150.6 million for the six months to June 30, the firm said on Monday. The growth was fuelled by a 39.6-percent jump in gross gaming revenue – to US$386.8 million – at its NagaWorld casino property.

The firm is also developing a casino resort in the Primorye Integrated Entertainment Zone (IEZ), close to the Russian Pacific port city of Vladivostok. It is scheduled to start operations by 2019, according to the firm’s latest estimates.

"We warn the cross-border gambling crime suspects to stop their criminal acts, to return to the country, and turn themselves in so that they could still be granted lenient treatment"