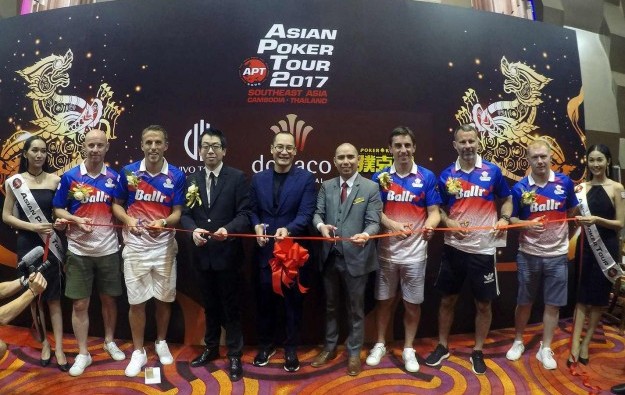 Cambodian casino resort Star Vegas Resort and Club officially opened on Saturday a poker room under the brand Poker King Club. The launch coincided with an event from the Asian Poker Tour (APT), according to a press release from the tournament organisers.

APT Southeast Asia is being held until July 7 at Star Vegas, located in the town of Poipet, near Cambodia’s border with Thailand. The casino resort is owned and operated by boutique casino investor Donaco International Ltd.

Professional poker player Tetsuya Tsuchikawa from Japan was the winner of the welcome event of the APT Southeast Asia, according to Saturday’s release.

After two days of side events, the US$1,100 buy-in main event is scheduled to start today (July 3). Running for a total of five days, the APT main event is a deep structured No Limit Hold’em tournament, according to the organisers.

The opening ceremony of the Poker King Club and of the APT Southeast Asia (pictured) was attended by some former players of English football club Manchester United. Among the players in attendance on Saturday were Nicky Butt, Philip Neville, Gary Neville, Ryan Giggs and Paul Scholes.

In August 2015, Donaco announced a three-year sponsorship deal with Manchester United. Donaco said that under the deal, it had been appointed “exclusive casino resort partner” of the football club in Thailand, Cambodia, Vietnam, Laos, Myanmar and South Korea. The Manchester United brand is well known and well supported in those countries according to some market research sources.

In a May 1 press release, Donaco said it had signed a three-year deal with Kings Consulting Ltd, under which Star Vegas would host a minimum of three international poker tournaments. Kings Consulting – a unit of Macau VIP junket room investor Suncity Group – is the owner of the Poker King Club brand.

"I think for our property [Grand Lisboa Palace], looking at breaking-even and stabilisation, will take… 12 months or so, or less”