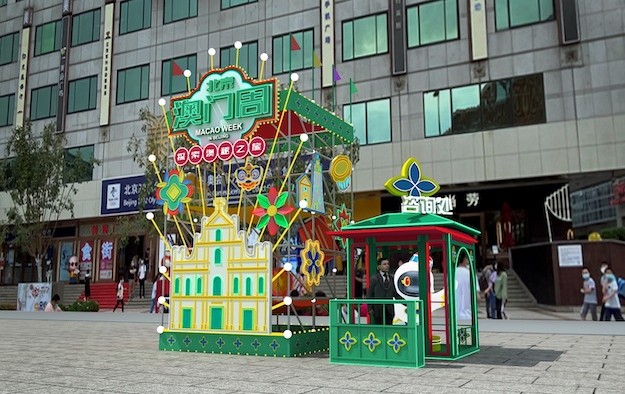 Macau’s casino-resort brands are taking part in a short marketing campaign starting on Saturday (September 26) in China’s capital, Beijing, to attract its residents to visit the Special Administrative Region, as Macau works to recover from the tourism slump associated with Covid-19.

Direct marketing of gambling is not permitted in mainland China, so the resort sector will be presenting a “Macau Tourism Exhibition” as part of “Beijing Macao Week,” which is being organised by the Macao Government Tourism Office.

A roadshow with a number of displays (example pictured in an artist’s rendering) is to be staged in Beijing’s Wangfujing Street from September 26 to 29, the tourism bureau has announced.

Macau’s Secretary for Social Affairs and Culture Ao Ieong U, said in comments to local media on September 11, that the city’s government was preparing tourism-promotion campaigns in several major cities in mainland China.

On September 1, Macau launched a MOP400-million (US$50-million) spending-stimulus scheme aimed at inbound tourists from the mainland, with discount offers on flight tickets and hotel accommodation.

The mainland is the only place currently to have a quarantine-free ‘travel bubble’ with Macau, provided those coming have a valid test certificate – issued within seven days of arrival – that they are free of Covid-19.

Applications for tourist exit visas from Guangdong province for visits to Macau – including those under the Individual Visit Scheme – were opened again on August 26, by the mainland authorities. Applications for the same type of permit, for people in other parts of China, are to restart on Wednesday (September 23), shortly before China’s autumn Golden Week, that this year runs from October 1 to October 8.

The August tally of visitor arrivals in Macau rose nearly 207 percent compared to July, but was down nearly 94 percent judged year on year, said a Monday announcement from the city’s Statistics and Census Service.

South Korea on Thursday said it would from June 1 resume issuing short-term tourism visas for trips to the country’s mainland, for individual visitors and groups of tourists. Permits for... END_OF_DOCUMENT_TOKEN_TO_BE_REPLACED