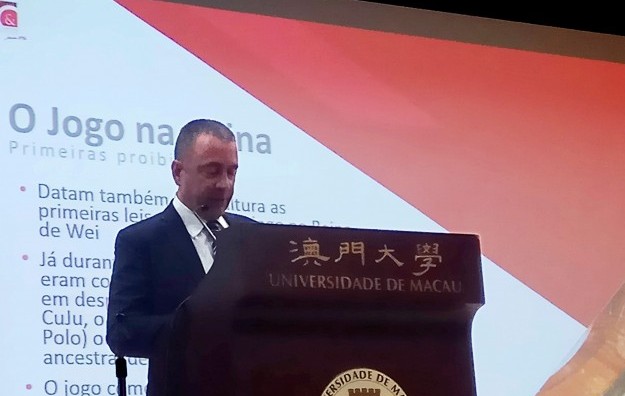 Macau’s concession model for its casino industry is working well, and should not be replaced by a system licensing casinos individually by venue. So says Macau-based lawyer Nuno Sardinha da Mata (pictured), a partner at C & C Lawyers and an expert in gaming law.

“Macau has the experience, and it has the means, to develop its the gaming industry under a concession regime. To change it into another system would be like starting over again,” he told GGRAsia.

Mr Sardinha da Mata’s comments were made on Friday on the sidelines of an international conference on gaming concessions, hosted by the Faculty of Law of the University of Macau.

During a presentation at the conference, Mr Sardinha da Mata said that he reckoned the concession system, rather than a licensing system, was the format that suited Macau in the “most adequate manner”.

Some of the city’s so-called satellite casino operators have suggested the idea of licensing the gaming operators by venue.

“We have this model [concession system] already for 20 years. It is working,” Mr Sardinha da Mata said. “We can perfect it. But I don’t think that to change it completely is an option.”

Macau’s six casino concessions are due to expire on various dates between 2020 and 2022.

Professor Wang Changbin, director of the Macao Polytechnic Institute Gaming Teaching and Research Centre, told GGRAsia in March that the practice of granting licences to casinos individually had its merit, as all casino operators and service providers would then be subject to the same level of scrutiny over their background and their source of finance.

According to the latest available information from the Macau casino regulator, the Gaming Inspection and Coordination Bureau – also known as DICJ – SJM Holdings currently provides gaming rights to 16 satellite casinos.

In his comments to GGRAsia, Mr Sardinha da Mata also said the Macau government should already be providing more information to investors and the public about what is going to happen to the city’s casino industry once the existing concessions expire.

“The Macau government should at least give information regarding the general model it is planning to adopt” in the future. “Sharing a little more information… would give more confidence to investors,” Mr Sardinha da Mata told GGRAsia.

He added that the government should also provide guidance on what local authorities consider to be “the best number of concessions allowed to operate in the future”.

The Macau government has so far provided little information about the future of the city’s gaming industry. In late July this year Macau’s Secretary for Economy and Finance Lionel Leong Vai Tac said there had been a preliminary proposal regarding possible amendment of the existing gaming law, the basis for the current concession system.

The Macau government commissioned two studies  last year on the possible development of the city’s gaming sector in the period between 2020 and 2030. The studies would also look into how many gaming licences should be issued once the concessions of the six current Macau operators expire. But so far there has been no announcement as to when the results of the studies will be released.

A casino cruise brand reportedly controlled by Malaysian entrepreneur Lim Kok Thay is to launch services from Singapore fewer than five months after the Lim family-founded Dream Cruises brand of the... END_OF_DOCUMENT_TOKEN_TO_BE_REPLACED