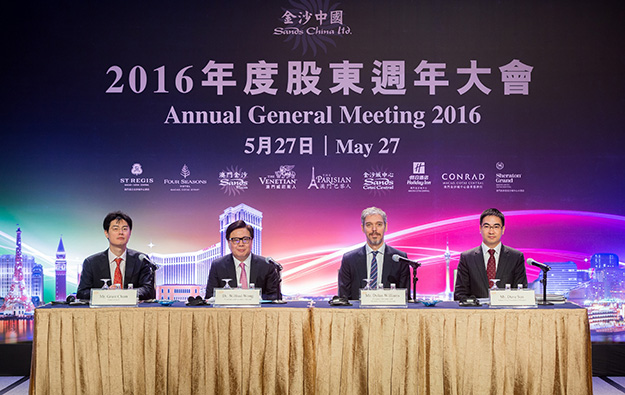 Macau casino operator Sands China Ltd on Friday said its board had approved a final dividend of HKD1.00 (US$0.129) per share for the year ended December 31, 2015.

The company had stated in a filing on March 11 that the dividend was likely to be paid on June 24. It would be available to shareholders whose names appear on the register of members of the company as of June 3, the company had said in that March filing to the Hong Kong Stock Exchange.

In January, Sands China’s board announced an interim dividend of HKD0.99 per share.

“Sands China is pleased to announce the payment of a final dividend of HKD1 per share and to be able to reward our shareholders for their ongoing support and commitment,” said Mr Wong in a prepared statement.

He added: “Despite the challenges in the Macau market, we again delivered a strong set of financial results, while meaningfully contributing to Macau’s diversification and long-term development objectives as Asia’s leading business and leisure tourism destination.”

Macau is to create distinct zones on its casino floors and designated gambling chips that will be solely for the use of players from overseas. The moves will be part of a new gaming tax system to... END_OF_DOCUMENT_TOKEN_TO_BE_REPLACED