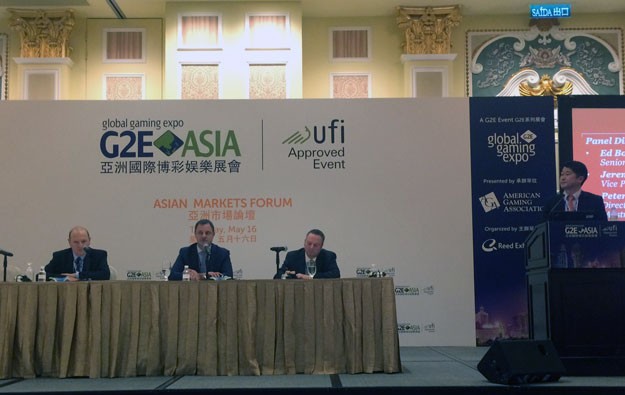 Decision makers in Japan should learn from other gaming jurisdictions but create a legal framework that is appropriate for their own market, suggested on Tuesday a panel of gaming industry experts.

They were speaking during a conference session at the Global Gaming Expo (G2E) Asia 2017, a casino industry trade exhibition and conference being held at the Venetian Macao casino resort.

The session started with a preview of a white paper titled ‘The Challenges and Current Status of Integrated Resort (IR) Development in Japan’, being prepared by PricewaterhouseCoopers (PwC). The paper will include updates on the progress of casino legislation in Japan, the structure of legislation and licensing, and on problem gambling safeguards.

Legislation making casino gambling legal in Japan came officially into effect on December 26. But casino legalisation in the country is a two-statute process. After approval of the enabling bill legalising casino resorts at a conceptual level, a second piece of legislation – known as the implementation bill – has now to be passed, detailing the specifics, including how casinos are administered and regulated.

“We are expecting the implementation bill to be passed at the Diet [Japan’s parliament] within this year or at least early next year,” said Masahiro Terada, senior manager at PwC.

PwC acknowledged in its Tuesday presentation that there are heightened challenges for casino gaming in Japan, namely: the need for strong regulation on responsible gaming; anti-money laundering regulation tailored to the country’s “unique challenges”; and the need to tackle issues related with compliance and human resources.

“What’s positive about the IR industry in Japan is that it will come with the most robust regulation,” said Jeremy Walker, vice president for international development at Macau-based casino operator Galaxy Entertainment Group Ltd.

Mr Walker added: “It’s very important to think about what is the vision that the Japan government will set forward in their legislation and make sure that we [casino operators] create the right approach to support growth and economic development.”

Ed Bowers, senior vice president of global gaming development for U.S.-based casino operator MGM Resorts International, said the firm would like to see “strong regulation in Japan” and is “perfectly happy to go through the necessary checks” in order to secure a casino licence in the country.

MGM Resorts had declared itself a candidate for a Japanese casino gaming licence long before lawmakers in that country passed the casino enabling bill in December.

Commenting on regulatory issues, Mr Bowers said Japanese decision makers would have to carefully consider the impact of the measures they decide to introduce.

“If you had an entry levy like Singapore does, what level should that be [in Japan]? We should think what the objective is and what’s appropriate for that market. For example restrictions on the number of gaming tables like you have in Macau … these things are commercially relevant [for casino operators] and must be carefully considered,” said the executive.

Peter Cohen, director of regulatory affairs at public policy consultancy The Agenda Group, said potential candidates for a casino licence in Japan should be prepared for a “quite intrusive” process regarding background checks.

Regulators in Japan are also likely “to want performance guarantees to make sure that things get build in a timely fashion,” said Mr Cohen. He was previously executive commissioner and chief executive of the Victorian Commission for Gambling Regulation in Australia.

“There will probably be a lot of regulatory oversight to ensure that every promise made during the licensing process is delivered and that these integrated resorts are operated in the most professional and world-class manner,” added Mr Cohen.

Banking group Morgan Stanley said in a note this week that the passage of the implementation bill regarding Japan casino resorts is likely to be conditional on legislators first approving a law to counter gambling addiction.

Macau’s health authorities said on Sunday that they would require all people wishing to enter the city’s casinos not only to have their body temperature measured and to display a... END_OF_DOCUMENT_TOKEN_TO_BE_REPLACED