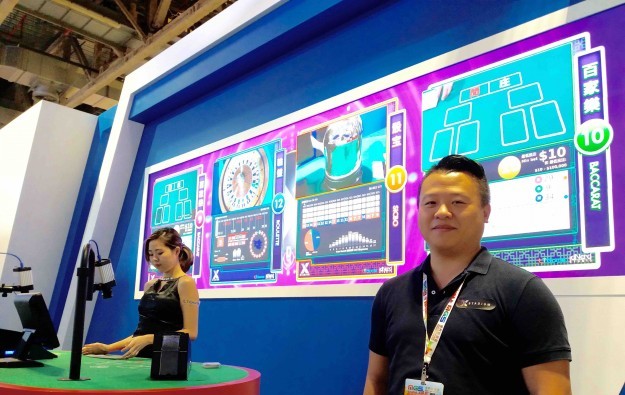 A Hong Kong-based family company – idNerd Studio – is in talks with several casino operators in Macau and beyond with a view to supplying what it says is state-of-the-art display and animation technology for stadium-style casino electronic games.

The product – X Stadium – uses a high-quality graphics card and is said to be able to create attention-grabbing animated images for the large overhead displays typically found on casino stadium-style games. The product was exhibited at Macao Gaming Show 2016 in November.

The animations are based on real-time data in the ‘trends’ found in game results. A search for patterns in baccarat results is of particular appeal to many Chinese casino gamblers.

“On a traditional stadium game you have a lot of TV displays that are all driven by a video matrix, where your video comes in, and then is fed to various screens: that rather restricts what you can do,” explained idNerd’s managing director, Peter Wong (pictured, right).

“Ours is a completely virtual display where we can move graphics and content anywhere on the screens,” he added.

X Stadium, while only a media device and not a gaming device, can nonetheless be linked to an electronic card shoe used for an electronic table game. So for example, when six ‘banker’ results turn up in a row in baccarat; that will come up on the game’s media displays, highlighting the fact.

Hong Kong-born Mr Wong grew up in Canada but returned to Hong Kong 13 years ago. His brother Jacky acts as creative director of the firm, and has previously worked on animations for media organisations including Cartoon Network in Canada.

Peter Wong said there are “quite a few operators in Macau that are interested already” in X Stadium, as well as operators in “other markets”.

The firm hopes to have the product “up and running” in Macau venues by at the latest the second quarter of 2017.

“Our product is not a gaming device, it’s a media device. What it’s doing is taking our signage and your [the casino’s] hardware, and making it more appealing, so we are creating more life for the casino,” stated the entrepreneur.

Macau’s casino gross gaming revenue (GGR) for the first five days of February is estimated at MOP1.9 billion (US$235.1 million) – or MOP380 million per day – a level that suggests a “45... END_OF_DOCUMENT_TOKEN_TO_BE_REPLACED