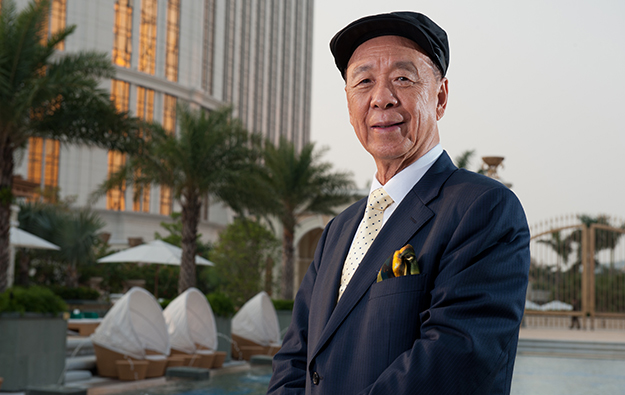 The rise in Macau casino stock values in 2017 has contributed to the growth in the fortunes of some of the sector’s best-known entrepreneurs, according to Forbes’ latest ‘Hong Kong’s 50 Richest People’ list, published this week.

Lui Che Woo (pictured), founder and chairman of casino operator Galaxy Entertainment Group Ltd, continues to be the richest gaming tycoon in the Hong Kong list. His net worth jumped nearly 70 percent from an estimated US$11.2 billion in January 2017 to US$19 billion in January this year, Forbes said. Mr Lui climbed three positions to 3rd place on Forbes’ list.

A strong growth in casino gross gaming revenue for Macau’s gaming sector in 2017 helped push up share prices of the city’s casino operators. Galaxy Entertainment saw its stock price increase almost 86 percent in 2017 from its value as of end-2016, according to data collated by GGRAsia.

Pansy Ho Chiu King, co-chairperson of MGM China Holdings Ltd, has seen her personal fortune increase by an estimated 27.9 percent, to US$5.5 billion, according to Forbes. Ms Ho, a daughter of Macau casino tycoon Stanley Ho Hung Sun, climbed one position to 15th place in January 2018.

Lawrence Ho Yau Lung, chairman and chief executive of Melco Resorts and Entertainment Ltd, saw his net worth jump approximately 85 percent year-on-year, to US$2.6 billion. Mr Ho, a son of Stanley Ho, saw his ranking among Hong Kong’s wealthiest people jump from 42nd to 29th, according to Forbes.

Angela Leong On Kei, fourth consort of Stanley Ho and an executive director of SJM Holdings Ltd, saw her net worth slip 7.5 percent to US$3.7 billion this year, from US$4 billion in January 2017, said Forbes. She went from 18th place to 22nd position. According to the magazine, Ms Leong owes the vast majority of her wealth to her portfolio of properties in Hong Kong.

The latest ‘Hong Kong’s 50 Richest People’ list by Forbes included other billionaires that, while owning diversified holdings, had a sizeable exposure to Macau’s casino sector.

Pollyanna Chu Yuet Wah, chief executive of Hong Kong-listed Kingston Financial Group Ltd, saw her net worth increase by 150 percent year-on-year to US$12 billion. She climbed to 7th place in the overall list and remains Hong Kong’s wealthiest woman, according to Forbes.

A newcomer to this year’s list is Henry Cheng Kar Shun, chairman of Chow Tai Fook Enterprises, in 49th place with an estimated fortune of US$1.3 billion. He took over from his father Cheng Yu Tung, who was Hong Kong’s third-richest person when he died in 2016. Henry Cheng is developing a US$9.5-billion Greenwich Peninsula residential-and-commercial project in Southeast London in the United Kingdom capital. The group has also been expanding its casino interests in recent years, via involvement in projects in Vietnam, Australia and the Bahamas.

Forbes says the net worth of Hong Kong’s wealthiest people soared last year, supported by a 37 percent jump in the Hang Seng index, a booming real estate market and a stronger global economy. The magazine’s annual list is compiled using shareholding and financial information obtained from the individuals, stock exchanges, analysts and private databases. The net worth of the people on the list is based on share prices and currency rates as of January 5, it added.