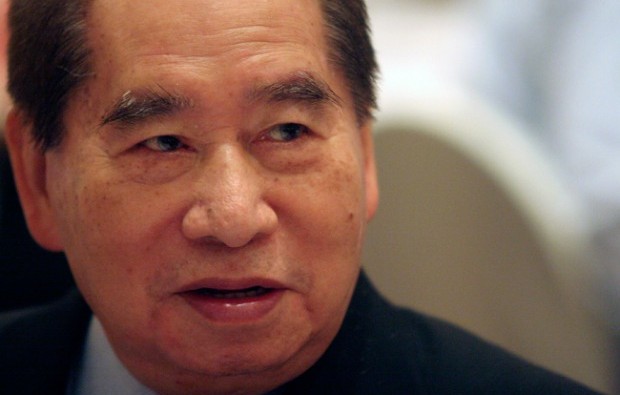 Three of the five wealthiest Philippine nationals – as defined in an updated listing by Forbes magazine – have casino investments in the country. And a fourth in the top five of the ‘Philippines’ 50 Richest’ was at one stage linked with a Manila casino resort project.

Some investment analysts think the Philippines is in a sweet spot for growth in a sunrise industry such as casino gambling thanks both to domestic demand and the nation’s proximity to mainland China. In 2012 and 2013, the Philippines saw the strongest growth in gross domestic product since the 1950s, recording advances of 6.8 percent and 7.2 percent respectively, according to the Philippine Statistics Authority.

In first place on Forbes’ Philippines list for the seventh year in a row – and with a net worth estimated at US$12.7 billion as of August 18 – is Henry Sy (pictured), aged 89.

Mr Sy’s family control Belle Corp, which owns 100 percent of Premium Leisure and Amusement Inc. The latter is part of the consortium that holds a gaming licence from the national casino regulator – the Philippine Amusement and Gaming Corp (Pagcor) – for casino resort City of Dreams Manila. The resort is expected to open at the turn of the year.

Belle Corp on August 18 said it had hired Hong Kong-based brokerage firm CLSA Ltd to “study the feasibility” of the company selling “a portion” of its current equity ownership in Sinophil Corp, the unit that will hold Belle’s gaming investments under a corporate reorganisation announced recently.

In third place in Forbes’ Philippines richest list, worth an estimated US$5.2 billion net, is Enrique Razon Jr, aged 54.

The entrepreneur inherited International Container Terminal Services Inc – which operates ports in 22 countries – from his father in 1995.

Since then he has diversified, including as developer and operator via Bloomberry Resorts Corp of the US$1.2 billion Solaire Resort and Casino at Manila Bay, which opened its first phase in March 2013.

The resort is currently adding an extension with 300 more rooms, a shopping mall and a theatre.

Mr Razon and senior executives from Bloomberry attended the Japan Gaming Congress in Tokyo this May, where his company set out its ambitions to be an investor in the Japanese market if casinos are legalised there as widely expected.

In fourth spot in the Philippines’ 50 Richest, worth US$5.1 billion net, is Andrew Tan, aged 62. Mr Tan is chairman and chief executive of Alliance Global Group Inc, which is a joint venture investor with Genting Hong Kong Ltd in the Resorts World Manila casino resort at Newport City near Manila International Airport.

The fifth position in Forbes’ list is taken by John Gokongwei Jr, aged 87, with US$4.9 billion.

The businessman’s Robinsons Land Corp was at one stage in talks with Universal Entertainment Corp – a Japanese firm controlled by pachinko and casino slot machine manufacturer Kazuo Okada – to develop jointly the US$2 billion gaming resort known as Manila Bay Resorts Mr Okada is building at Manila Bay. In May 2013 it was reported that the talks had broken off without a deal being made.

As far as domestic demand for casino gaming is concerned, some analysts suggest the country is currently benefiting from a so-called ‘demographic bonus’; when young people are still coming into the labour and consumer markets in large numbers and are able via their spending and taxes to expand the economy and support the dependent population of very young and very old.

Half of those recorded in Philippine  households in the 2010 official census were under 23.4 years of age. The household population then was 92.1 million. Four out of 10 in households were of school age according to those data, although the annual growth rate in 2010 had slowed to 1.9 percent from an average of 2.3 percent between 1990 and 2000.

The country is also only a few hours in flying time from mainland China. Independent brokerage CLSA said in a report in January that it estimated by 2020 there would be 200 million outbound tourists from mainland China to other jurisdictions – double the 100 million who left China in 2013. It added it expected the amount spent by such travellers would increase disproportionately – possibly tripling from 2013 levels.

In March, Cristino Naguiat, chairman of Pagcor, said the Philippines might become the world’s second biggest casino gambling market, projecting annual revenue to reach US$6 billion to US$7 billion in five years.

In the first half this year however, the market missed Pagcor’s own target, with the regulator reporting revenue of PHP19.96 billion (US$455 million), compared to PHP21.06 billion in the first half 2013.

Macau recorded 965 “gaming-related” crimes in full-year 2022, down 29.7 percent on the 1,372 identified in the previous year, according to the latest statistics published on Tuesday by... END_OF_DOCUMENT_TOKEN_TO_BE_REPLACED