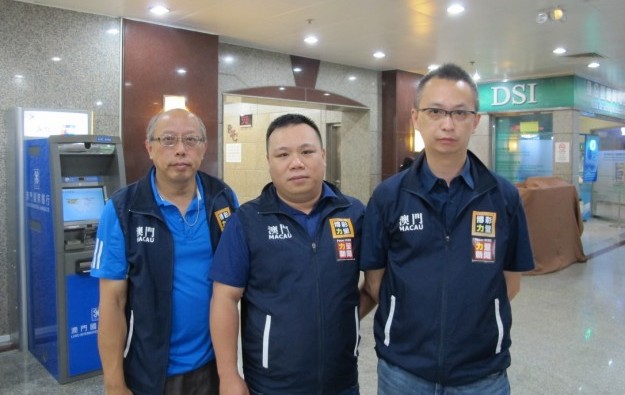 A Macau gaming labour group met on Tuesday the head of the city’s gaming regulator, and asked that the city’s government intercede with the local casino operators to get them to award a second 2019 bonus to their workforces. Last week a different labour group delivered a letter addressed to the city’s Chief Executive, urging the same course of action.

In the latest lobbying, Stephen Lao Ka Weng (pictured, first right), president of the gaming labour group Power of the Macao Gaming Association had – along with several colleagues – a closed-doors meeting with Paulo Martins Chan, director of the Gaming Inspection and Coordination Bureau, a body also known as DICJ.

The association also expressed to Mr Chan its opinions on several other topics, according to its account of the meeting which it gave to local media afterwards. They covered: the local government’s voluntary pension scheme; promotion opportunities for casinos’ entry-level workers; and casino security concerns.

There has recently been a number of high-profile incidents involving security in or near casinos on Cotai, which has led to the regulator asking casino operators to beef up security.

“With the current gaming revenue trend and visitor tally, we believe that the gaming companies should be able to award their workers a [second] bonus. We hope that the casino operators are not shaving their bonus payout to workers,” Mr Lao remarked to media.

The Power of the Macao Gaming’s Mr Lao told media on Tuesday: “We understand that bonus pay is a discretionary decision from the [casino] employers…but we hope that if they have decided to pay it, they should make an announcement soon so that the workers will not need to guess it.”

He added: “If they are not paying, we also want to understand the reason for it.”

Most Macau operators that have made supplementary payments to staff on a twice-yearly basis in recent times have done so on an ad hoc basis, rather than as part of a stated or predetermined policy.

An exception is SJM Holdings Ltd, which has formalised such payments via what it terms a yearly “living subsidy” given to eligible staff in two instalments. The firm has pledged since the mechanism’s introduction in 2014 to maintain it until 2020. It has nonetheless restated the policy year-by-year.  The payments are equivalent in aggregate to either one-and-a-half months of annual salary or two months of salary, depending on the worker concerned.

Power of the Macao Gaming Association said that it had suggsted during its meeting with Mr Chan that the government and the casino operators should work together to enhance the minimum contribution ratio – on the employer side – for the government’s voluntary pension scheme, also known as the Non-Mandatory Central Provident Fund (CPF). According to the current rule, participating employers and employees are requested respectively to contribute the equivalent of at least 5 percent of the worker’s monthly salary to the CPF.

The gaming labour group’s head said he hoped the gaming regulator would help address with the casino operators all the gaming workers’ concerns.