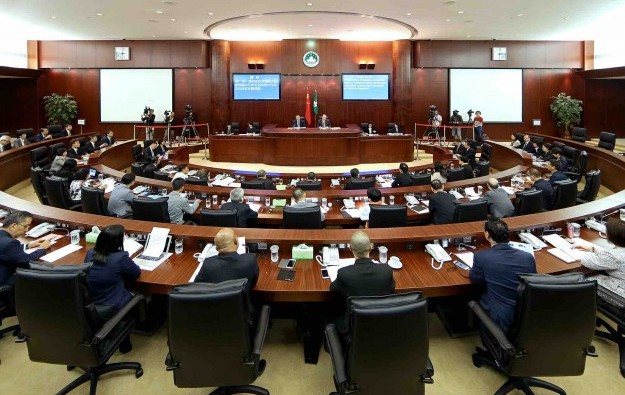 A preliminary version of the Macau government’s “mid-term review” of the city’s gaming industry will be ready by the end of next month, Chief Executive Fernando Chui Sai On announced on Wednesday.

“The preliminary work will be concluded by the end of September,” Mr Chui said during a question and answer plenary session at Macau’s Legislative Assembly (pictured).

“We hope to conclude the work by the end of the year,” he added. His comments did not clarify when information on the findings of the mid-term review would be put into the public domain.

Mr Chui told lawmakers the government was planning to conduct a public opinion consultation as part of the mid-term review, “to get the population’s feedback” on the contributions of the gaming sector to Macau.

He said: “Regarding the mid-term review of the gaming sector, we will study eight topics, namely: development of the gaming industry; its economic impact on Macau; its impact on small- and medium-sized enterprises; its impact on Macau’s society; the relationship between the gaming and non-gaming sectors; whether gaming operators are complying with the terms in their contracts; the operations of gaming companies; and whether gaming operators are fulfilling their social responsibilities.”

The mid-term review began earlier this year and is being conducted by an unnamed local tertiary education institution.

The Macau government has previously said that how each of Macau’s six gaming operators scores in the review will not have a direct impact on whether or not to renew their concessions, which expire on varying dates between 2020 and 2022. But Secretary for Economy and Finance, Lionel Leong Vai Tac, has admitted that negotiation on the specific terms under which any such renewals might take place would be based on the mid-term review’s conclusions.

During his Wednesday comments, Mr Chui said he remained “prudently optimistic” regarding the development of the city’s gaming industry, despite 14 straight months of casino gross gaming revenue (GGR) decline in Macau measured year-on-year.

He noted that Macau still remained the world’s top casino destination by GGR. Mr Chui added that the city’s gaming sector had already accumulated significant experience and was “highly competitive” by international standards.

Macau’s Chief Executive also pointed that there were currently several “international level” casino resorts under construction in the Cotai district.

Macau recorded 965 “gaming-related” crimes in full-year 2022, down 29.7 percent on the 1,372 identified in the previous year, according to the latest statistics published on Tuesday by... END_OF_DOCUMENT_TOKEN_TO_BE_REPLACED