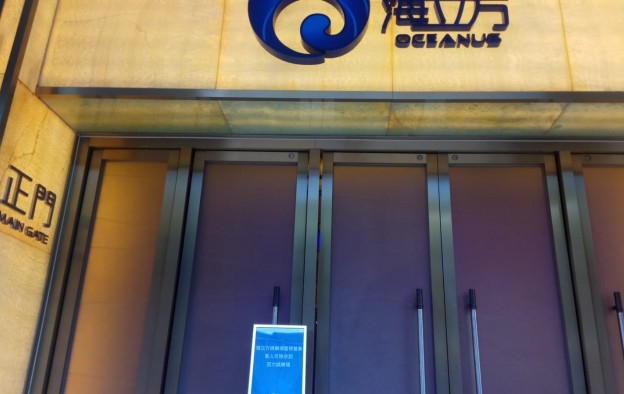 Casino Oceanus, a self-promoted venue of Macau gaming operator SJM Holdings Ltd, has suspended its operation, according to a notice (pictured) on Tuesday outside the property near the city’s Outer Harbour Ferry Terminal. The notice, in Chinese, did not give a reason for the suspension, nor say how long it might last, but advised patrons to go to the next door Casino Jai Alai property, which is also under the licence of SJM Holdings.

GGRAsia approached the city’s casino regulator, the Gaming Inspection and Coordination Bureau, seeking clarification on the timing and reasons for Casino Oceanus’ closure. The gaming bureau suggested GGRAsia monitor the latest edition of the currently-daily media briefings given by the Macau government on the local Covid-19 situation.

Health official, Leong Iek Hou, said at Tuesday’s briefing from the Novel Coronavirus Response and Coordination Centre, that a now-patient identified as case 72, had prior to confirmation of diagnosis on Monday, been gambling at Casino Oceanus.

According to the government’s published activity log for that case – i.e., a record of the person’s activities in the community – he had been to Casino Oceanus on September 28, September 30, and October 2. Additionally, according to the activities log, he had also been to some shops at the Venetian Macao Resort, operated on Cotai by Sands China Ltd, on October 3.

Ms Leong stated in Tuesday’s briefing: “Case number 72 had been to Casino Oceanus…and due to consideration of that, we have arranged for IAM [Macau's Municipal Affairs Bureau] to conduct a thorough disinfection of that property today.”

She added: “All of their [Casino Oceanus] staff have been sent to do a virus test this afternoon.” She did not clarify whether the closure of Casino Oceanus was ordered by the government.

Case 72, a male non-resident from the mainland, had been working as a decorator in Macau.

A statement issued on Tuesday evening by SJM Resorts SA, the SJM Holdings unit that has the Macau gaming concession, also did not clarify whether the closure of Casino Oceanus was mandated or voluntary.

The statement said: “In accordance with the government’s prevention and control guidelines, Casino Oceanus is closed temporarily for disinfection work.”

It was also disclosed by the health authorities on Monday, that case 72 had stayed at Sands Macao on September 26 and September 27. The property is a casino hotel run by Sands China, and is also close to the Outer Harbour Ferry Terminal.

The Health Bureau’s Ms Leong said during Tuesday’s media briefing, that compared with Oceanus, Sands Macao has been deemed as a venue with “relatively lower” risk of Covid-19 spread occurring. Case 72 had “only slept” at the Sands Macao hotel, and “had not used any of Sands Macao’s other facilities” during his time at the property, she said.

GGRAsia asked Sands China on Tuesday whether the local health authorities have requested any follow-up measures be adopted at Sands Macao, and if the property would see any changes to its current business hours.

The company said in an email: “Sands China Ltd has been maintaining close communication with the Macau Health Bureau and other relevant government departments, and will proactively implement follow-up measures to support the government’s epidemic prevention efforts. The company will continue to act in strict compliance with the latest guidelines issued by the authorities to ensure the health and safety of team members and guests.”

From the stroke of midnight on Wednesday, October 6, Macau’s entertainment venues – excluding casinos – will have to suspend their operations as a Covid-19 countermeasure. That is according to a Tuesday executive order from Macau’s Chief Executive, Ho Iat Seng.

Package tours from mainland China to Macau will resume from Monday, February 6, confirmed Macau’s Secretary for Economy and Finance, Lei Wai Nong, in a Friday press conference. The return of... END_OF_DOCUMENT_TOKEN_TO_BE_REPLACED