Casino ops’ own shuttle from HKZM Bridge from Oct 24 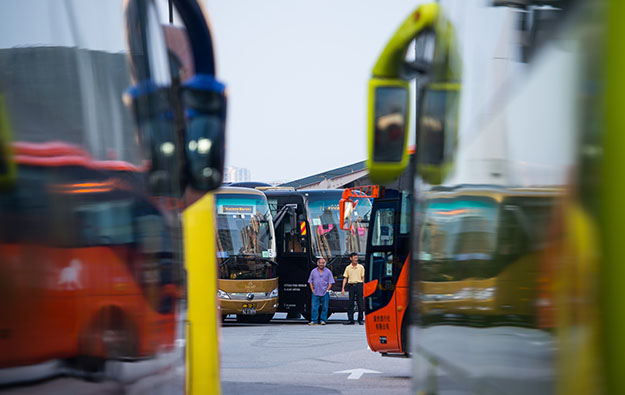 A shuttle bus service jointly run by Macau’s six casino operators, to take people arriving at the Macau boundary checkpoint of the Hong Kong-Zhuhai-Macau (HKZM) Bridge to the two ferry terminals in the city, will start operation on Wednesday (October 24) at 10am, an hour after the bridge opens to traffic for the first time.

The information was confirmed to GGRAsia by MGM China Holdings Ltd, one of the city’s six casino concessionaires.

Why the jointly-run casino shuttles serving the bridge checkpoint would only take passengers to the ferry terminals – where visitors would need to take another mode of transport to one of the casino resorts – rather than direct to the doors of the casinos, similar in the manner to the “Cotai Express” a shared service serving resorts within the Cotai Strip, was not clarified in the information made available to GGRAsia.

Previously the Macau government had said it wanted to limit the number of casino shuttles on the city’s roads, and suggested shuttle sharing between the six casino operators.

MGM China said in its email to GGRAsia: “MGM has joined hands with the other five Macau casino operators to launch two shuttle bus routes: one to connect passengers from the HKZM Bridge Macau port [boundary] to Macau [Maritime] Ferry Terminal and the other one… to Taipa Ferry Terminal to optimise the shuttle bus service.”

“The passengers can then connect to MGM Macau or MGM Cotai via our guest shuttles at both [ferry] terminals and vice versa,” the casino operator added. All of Macau’s six casino operators already provide shuttle services to passengers at the city’s two ferry terminals in order connect customers to their respective properties.

MGM China noted that the new joint shuttle serving the bridge checkpoint would operate from 10am to 11pm. The service would run “every 10 minutes” but that might be adjusted at some point “based on demand in order to minimise the burden on traffic”.

Macau’s casino shuttle buses are not allowed to cross the HKZM Bridge itself, the city’s Transport Bureau noted in May. At that time the bureau said it was discussing with the casino concessionaires the possibility of the companies running exactly the type of shuttle service now described by MGM China.

Several licensed bus services have already announced of their cross-border trips that will take passengers to travel between several casino resorts in Macau and Kowloon in Hong Kong.

The HKZM Bridge provides for the first time a direct-line road link between Macau and the major international transport hub of Hong Kong International Airport, across the Pearl River Delta. The infrastructure spans 55 kilometres (34 miles) and is the longest sea-crossing bridge in the world. Boundary crossing services for passengers and vehicles travelling between Macau and Hong Kong will be open 24 hours a day, once the bridge is launched.

President Xi made brief remarks at the ceremony before formally opening the structure. Macau’s Mr Chui said the HKZM Bridge project had been “highly valued and greatly supported” by the Chinese central government. Mr Chui added that the achievement of building it had resulted from the close cooperation between Guangdong, Hong Kong and Macau.

The Macau government announced on Tuesday tightening of its Covid-19 testing requirements for front-line casino staff, halving the interval between nucleic acid tests to every two days, from every... END_OF_DOCUMENT_TOKEN_TO_BE_REPLACED