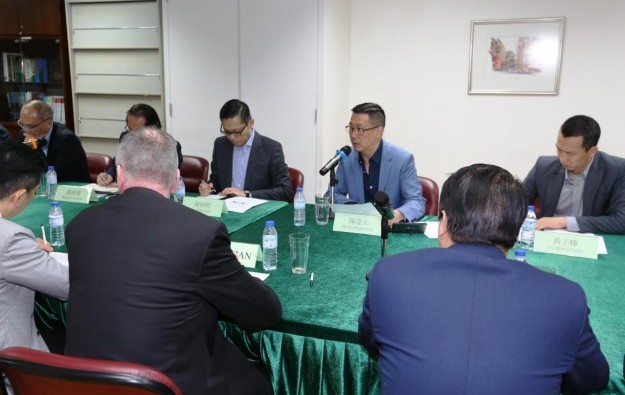 Macau casino industry representatives have pledged to the city’s authorities to help curb illicit currency exchange reported to have taken place in or near the city’s casinos, said the Macau government in a statement.

At a meeting on Friday with the local gaming regulator and senior police, the gaming sector representatives said they would cooperate with ongoing police enforcement against such unauthorised activity, and bolster their own companies’ checks by resort security staff for signs of such trade.

The 14 casino representatives nonetheless reported a lessening of such suspected activity, which they attributed to the upped effort of the local police, said the government’s statement about the gathering.

The government added in its notice that in the past two months, approximately 1,000 people suspected of involvement in such illicit money-changing activities had been “intercepted”.

Late last month, Wong Sio Chak, Macau’s Secretary for Security, had said in a media briefing that a total of 3,050 people from outside Macau had been apprehended by the Macau police in 2018 for alleged involvement in illicit money exchange activities either inside or around the city’s casinos.

In its Friday commentary, the government said all of those 3,050 suspects had been “sent out of Macau”, but didn’t specify their destination or what action – if any – might have been taken against them away from Macau.

In a number of cases reported on last year, the suspects were said to have been from mainland China.

“Some of this alleged illicit activity had also been linked to other forms of crime such as scamming and robbery, posing a serious threat to community security and the operations of Macau’s casinos,” the government said in its press notice.

During Friday’s meeting, police officials said officers would step up enforcement work against illicit currency exchange activities and enhance intelligence exchange with law enforcement authorities on the Chinese mainland. Meanwhile, the police would establish closer contact with the local gaming sector in order to share more information to curb such illicit activities.

A number of investment analysts covering the gaming industry have said a possible motivation for unauthorised money exchange on the part of service provider and consumer would be an attempt either to get a cheaper service charge percentage on each transaction than that offered by banks and official money changers in the case of small amounts. In the case of larger transactions, the aim might be to circumvent mainland China’s currency export controls.

Since January 2018 mainland Chinese have been restricted to an annual CNY100,000 (US$14,939) limit per person for cash withdrawals when using overseas ATMs. In the past, China’s regulatory definition of “overseas” transactions has included ones performed in Macau.

In December 2016, the Monetary Authority of Macao already had set a limit of either MOP5,000 (US$618) or HKD5,000 per transaction for withdrawals at the city’s ATMs for customers using bank cards issued by mainland China banks.

In 2018, nearly 25.3 million of Macau’s 35.8 million visitors – i.e., 70.6 percent of all tourist arrivals – came from mainland China, although local research indicates not all mainland Chinese visitors are casino gamblers.

It is likely that Macau will shortly have a third round of citywide centre-based Covid-19 testing in little more than a week, after the results so far of a second mass test – that was due to finish... END_OF_DOCUMENT_TOKEN_TO_BE_REPLACED