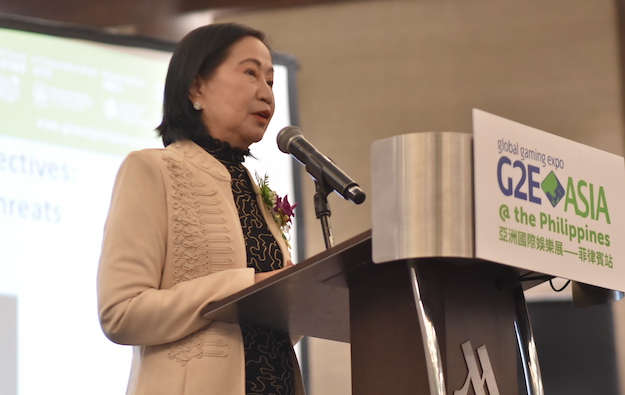 Andrea Domingo (pictured), chairman and chief executive of the Philippine casino regulator, confirmed in her keynote speech at the first Global Gaming Expo (G2E) Asia @ the Philippines that there had been a “temporary” lifting on the ban on new casino licences, in order for a project in the special economic zone of Clark on Luzon island, to go ahead.

Referring to President Rodrigo Duterte’s 2018 pledge not to permit in the Philippines more large-scale casino complexes or integrated resorts (IRs), the head of the Philippine Amusement and Gaming Corp (Pagcor) told the audience: “He lifted the ban in Clark last year… but even now Clark we think has enough [casinos].” She didn’t specify to what project she was referring.

But Ms Domingo said that such a decision was a special case because the country’s government did not want the growth of the bricks and mortar casino industry to be concentrated in certain parts of the country, nor for the casino sector to outpace the improvements in infrastructure to welcome tourists.

“We do not want to overburden the industry by just blatantly giving out licences. The President declared a ban on IRs and casinos in January 2018 and we have observed that,” said Ms Domingo.

Regarding spreading the industry around the country, she noted: “We have to have critical mass in different parts of the country.”

“We are improving our transport systems, we are improving our airports and our seaports. Where will all these people go, if we do not give them the services or the amusements or the entertainment or the gaming that they would like?” she told the delegates.

She further noted: “So now we are able to have two IRs in Cebu… I think we have six in Metro Manila… and a maximum of nine to 10 in Clark. Even in Clark we have closed down acceptance of any applications for casinos.”

Part of the reasoning in limiting licence numbers was also to prevent problems for investors, said the Pagcor boss.

Ms Domingo said the authorities in the country wanted to “regulate not only the social effects or the revenue portion of the industry, but we would also like to be able to rationalise, so that everybody that we could give a licence to, can be successful… has a very good chance of being successful.”

She added: “We would like people to know that if it’s overcrowded, there’s no use in going in there and putting your good money in. Just go and invest it somewhere else.”

Ms Domingo also addressed the question of Philippine Offshore Gaming Operators (POGOs) licensed by Pagcor. They have been in the headlines recently because of allegations of tax evasion and labour and immigration irregularities by some operating in the sector.

She stated: “As you know, as far as POGOs are concerned, we have also stopped acceptance of new applicants. This is to give us time… to mature ourselves… so that we can put in all of the regulations.”

The offshore gaming sector was only “two and half years old here” in terms of Pagcor licensing, she observed.

“We have learned 90 percent of it, but there is still 10 percent that is so dependent on technology that we just have to learn more about it,” added Ms Domingo.

By 2020 she said the authorities “will have addressed 95 … 97 percent of the problems with POGOs, including the dark side: prostitution, kidnapping and financing”

The Pagcor boss added: “We have a very healthy relationship with all of the law enforcement agencies in the country. The NBI [National Bureau of Investigation], the police, the Bureau of Immigration.”

Local media on Sunday reported that President Duterte had given tax-owing POGOs three days to pay their taxes, warning them of adverse consequences if they do not meet what he termed his “grace period.”

On Tuesday, asked about the President’s deadline for tax-evading POGOs, Ms Domingo told reporters: “They [POGOs] have to comply. We are already working on it.”

G2E Asia @ the Philippines is a casino trade exhibition and conference being held at the Resorts World Manila casino resort on Tuesday and Wednesday (December 3 and 4). There are already Las Vegas and Macau editions under the G2E name.

Casino operator Melco Resorts and Entertainment Ltd announced on Thursday that it would launch at the end of June a new, themed zone for “family-friendly” entertainment at its majority-owned... END_OF_DOCUMENT_TOKEN_TO_BE_REPLACED