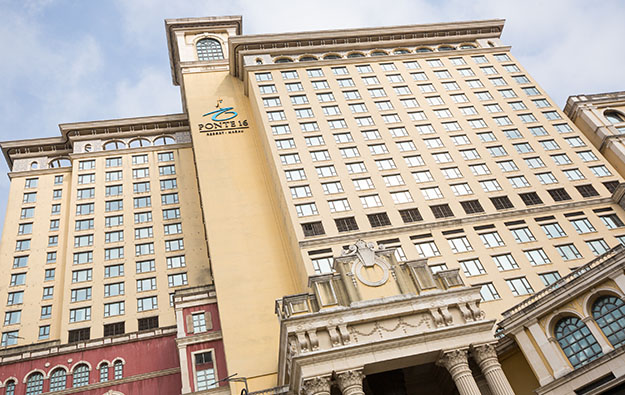 Hong Kong-listed casino investor Success Universe Group Ltd hopes its construction plan for an extension of the waterfront casino resort complex Ponte 16 can be approved by the Macau government “within this year”.

The firm’s deputy chairman and executive director Hoffman Ma Ho Man confirmed the aspiration in comments to GGRAsia on Wednesday. The extension, referred to by the firm as the “third phase”,  will be on land immediately to the south of the current Ponte 16 complex (pictured), near the historic Pier 16 building in the Inner Harbour district, Mr Ma explained.

The third phase would have a shopping mall, and the promoters hope some additional gaming space, said Mr Ma. Macau casino operator SJM Holdings Ltd is a partner in Ponte 16 alongside Success Universe, and Ponte 16 uses the casino firm’s gaming licence.

GGRAsia asked Mr Ma why the casino resort extension project – which had been mentioned in company commentary earlier in the decade – had not so far come to fruition.

He told us a portion of the third phase had to incorporate what he termed a “flooding solution” in consultation with the city’s government.  The Inner Harbour district is notorious for water inundation during very high tides and during the more severe typhoons.

“We have spent a lot of time on studying the flooding solution issues with our plan” for the third phase, said Mr Ma.

Ponte 16 is one of two local waterside resorts with gaming facilities – the other being Macau Fisherman’s Wharf on Macau peninsula – to have fitted floodgates at private-sector expense and made other changes to try to guard against the risk of business disruption due to severe-weather flooding, especially typhoon-related flooding.

The Ponte 16 resort complex runs parallel to the eastern bank of the river that links the Inner Harbour to open water. It is a low-lying area. A gaming floor at the property was flooded during 2017’s category-10 storm known as Typhoon Hato, which badly affected Ponte 16′s operations.

In his latest commentary to us, Mr Ma did not specify the firm’s latest anti-flood measures for the intended third phase at Ponte 16. But he confirmed that Success Universe was expecting government approval for its third-phase construction plan “within this year”.

On the sidelines of the Success Universe annual general meeting in Hong Kong on Friday, Mr Ma had mentioned to Hong Kong media the third phase of Ponte 16 would be likely to take “two years” for completion of the construction works, once government approval to start had been received. He had also noted on Friday that the extension project would have an investment budged of “HKD600 million[US$77 million] to HKD800 million”, which would partly be covered by bank loans.

Macau recorded 965 “gaming-related” crimes in full-year 2022, down 29.7 percent on the 1,372 identified in the previous year, according to the latest statistics published on Tuesday by... END_OF_DOCUMENT_TOKEN_TO_BE_REPLACED