Casino review next week, no change on cap: Macau govt 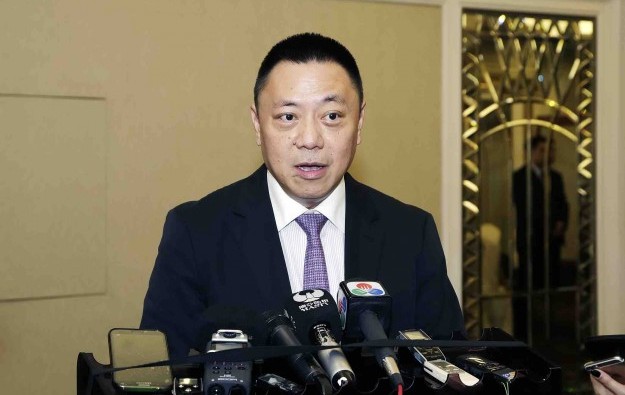 The Macau government “is not going to easily change its pledge” to maintain the cap on the number of new live dealer gaming tables in the Macau casino market unless “there is very big change in the local market or a huge social demand emerges,” said on Thursday the Secretary for Economy and Finance Lionel Leong Vai Tac (pictured).

Mr Leong was responding to questions from the media – posed on the sidelines of a public event – seeking his reaction to remarks by Macau legislator Angela Leong On Kei. Ms Leong, an executive director of Macau casino operator SJM Holdings Ltd, had said during a meeting on Wednesday, between legislators and government officials, that adherence to the current cap formula meant the the policy would “not be able to cope with future needs” of the industry.

The Wednesday meeting had been called to gather legislators’ views on the proposed Five-Year Development Plan for Macau, a package of social and economic policies covering the period 2016 to 2020 and aimed at encouraging the diversification of the local economy from hardcore casino gambling.

The proposed development plan reiterates the maintenance of the city’s table cap. The current table cap formula, announced four years ago, aims to limit live dealer table numbers to 3 percent growth compounded annually, until the end of 2022, from a base of 5,485 tables recorded at the end of the fourth quarter in 2012. The effect of the cap has been to limit to 250 the number of new tables allowed in recently-opened multibillion U.S. dollar casino resorts on Cotai.

Ms Leong had said at Wednesday’s meeting that she hoped the government would consider “a flexible adjustment” to the number of live dealer gaming tables allowed in Macau casinos when the government considered the findings of its commissioned “mid-term” review of the casino industry.

Speaking to media on Thursday, Mr Leong said the Macau government currently “did not see any need” to change the table cap policy.

The secretary additionally noted that a government wish – to see by 2020 non-gaming revenue account on average for at least 9 percent of all revenue generated by casino operators compared to 6.6 percent in 2014 – was based on a “scientific decision”. The goal is outlined in the city’s five-year development plan.

“From the opinions we gathered from the public and the [gaming] firms, and after some analysis, we think that for it [the percentage of non-gaming revenue in overall revenue] to grow from 6.6 percent to 9 percent is a scientific decision,” Mr Leong said. “And we would like to see it [average non-gaming revenue] go beyond 9 percent.”

The secretary reiterated his confidence such a goal could be attained, but added that was “not easy”.

The 200-plus pages making up the findings of the government’s mid-term review of the city’s casino industry were likely to be released next week, Mr Leong said at the same event on Thursday.

Steve Wynn, chairman of Wynn Resorts Ltd and its local unit Wynn Macau Ltd, which is building the US$4.2-billion Wynn Palace property on Cotai, told investment analysts on the group’s first quarter earnings call on Thursday, he was optimistic the review’s findings would have some positive things to say about the industry.

“We have some idea of what the review had to say in general terms, and that was that the upgrade, the expansion of the appeal of the Macau market was successful in every way; either met or exceeded the goals that were set early in the… millennium,” stated Mr Wynn.

The casino entrepreneur acknowledged that Macau’s rapid economic growth had resulted in “inflation and [increases in] the cost of living which has put some pressure on the local people as far as their rents,” and that had resulted in “the government putting pressure on us [casino operators] to keep raising wages, which we have all done.”

Ian Coughlan, an executive director at Wynn Macau, said during the earnings call that the group wasn’t expecting any unpleasant surprises from the mid-term review.

“Based on the significant gathering of information, it seems to be a very fact-driven analysis of what’s happened over the last 10 years, and we’re not expecting any negative aspect to it. It’s really just a health check to see where we’ve been, what we promised and what we’ve delivered as an industry and sets some markers for the future,” Mr Coughlan told investment analysts.

The mid-term review began in May last year. According to previous comments by Macau officials, it was due to cover nine topics, namely: “development of the gaming industry; its economic impact on Macau; its impact on small- and medium-sized enterprises; its impact on Macau’s society; the relationship between the gaming and non-gaming sectors; whether gaming operators are complying with the terms of their [existing concession and sub-concession] contracts; the operations of gaming companies; whether gaming operators are fulfilling their social responsibilities and the management of VIP gaming promoters”.

“In our case, I think we’ve led the market because of our stock ownership and other things we’ve done, and the other hotels have also been rather aggressive in responding to the government,” said Mr Wynn of the mid-term review while on his group’s conference call.

Macau’s casino gross gaming revenue (GGR) for the first five days of February is estimated at MOP1.9 billion (US$235.1 million) – or MOP380 million per day – a level that suggests a “45... END_OF_DOCUMENT_TOKEN_TO_BE_REPLACED