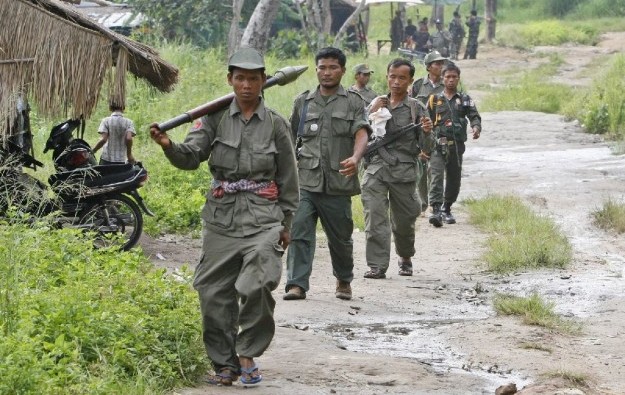 A casino and hotel project allegedly planned for a disputed border area has sparked a military standoff between Thailand and its neighbour Cambodia (file photo), reported the Bangkok Post newspaper on Wednesday.

The tension relates to a piece of land near a temporary border crossing at Chong Am Ma, which is wedged between Thailand’s Ubon Ratchathani province northeast of Bangkok, and Cambodia’s northern border province of Preah Vihear. Both countries claim the wedge of land as sovereign territory, although its ownership is linked to a wider border row, lasting at least a century, over the nearby Preah Vihear Temple complex.

The English-language media outlet said the simmering border row came to the boil again after Cambodian authorities allegedly moved in equipment near Chong Am Ma as part of a project to build a casino and a hotel, develop a local market and expand roads.

Cambodia allows casinos whereas Thailand does not. That has created a market for small gaming establishments – normally in undisputed areas on the Cambodian side of the border such as Poipet – that mostly serve day-tripping Thai customers.

A study by Chulalongkorn University’s Center for Gambling Studies has suggested Thais spend as much as US$10 billion annually on illegal gambling conducted within Thailand.

After the Thai army staged a coup in May, it was reported in that country’s media that a number of illegal Thai casinos – ones previously protected by senior military figures – had been shut down.

Border disputes between Thailand and Cambodia are common, with crossing points often closed at short notice.

In early June, a casino operator in Poipet reported that the number of Thais visiting its three venues each day briefly fell by around 40 percent following Thailand’s military coup on May 22.

Philippine gaming investor Leisure and Resorts World Corp reported a net loss of nearly PHP222.4 million (US$4.2 million) in the first three months of 2022, up from PHP125.6 million a year earlier.... END_OF_DOCUMENT_TOKEN_TO_BE_REPLACED