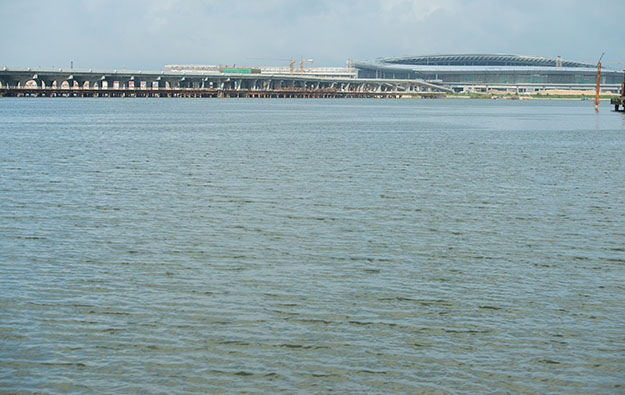 Macau casino shuttle buses will not be allowed to cross the Hong Kong-Zhuhai-Macau (HKZM) Bridge, confirmed the city’s Transport Bureau in a written reply to questions from GGRAsia. The bureau said additionally that it was discussing with the city’s casino operators the possibility of the firms providing a joint shuttle service from the Macau boundary crossing area of the bridge into the city.

“The casino shuttle buses are not allowed to cross the bridge to Hong Kong,” said a Transport Bureau spokesperson.

The person added that the bureau was now discussing with the city’s casino concessionaries the possibility of the companies running a joint shuttle bus service with two routes: from the Macau boundary crossing of the HKZM Bridge to, respectively, the Outer Harbour Ferry Terminal and the Taipa Ferry Terminal.

“When the tourists arrive to any of the [city’s] harbours, they can choose the respective casino shuttle bus” for the hotel they wish to visit, added the spokesperson.

Macau-bound visitors arriving via the HKZM Bridge may also take one of the two public bus routes that the government is planning to launch, which will serve respectively the downtown area of the city’s peninsula, and Taipa, the Transport Bureau said in a press conference last week. The bureau said it expects about 40,000 people to cross the border to Macau each day once the bridge opens to the public.

The HKZM Bridge (pictured in a file photo) is expected to open to traffic in 2018, but the precise date is still to be announced.

The piece of infrastructure, spanning the Pearl River Estuary, is a major new route between Hong Kong, Zhuhai and Macau. It aims to address the growing demand for transport between the three places, according to the authorities.

Deutsche Bank AG said in an April report that it was raising its growth estimates for second-half 2018 into full-year 2019 Macau mass-market gaming revenue, by five percentage points, to 13 percent year-on-year. It said the revision was to account for the launch of the HKZM Bridge.

“This should boost Macau visitations, initially from Hong Kong and eventually also from China, as the bridge connects the Hong Kong airport to Macau in a 30-minute journey. This is positive not only for mass gaming but also for retail and hotels,” wrote analyst Karen Tang.

Former Macau junket operator Suncity Group had no commercial need to seek illicit gains from under-the-table betting via the “multiplier”, as the company had a huge gaming business... END_OF_DOCUMENT_TOKEN_TO_BE_REPLACED