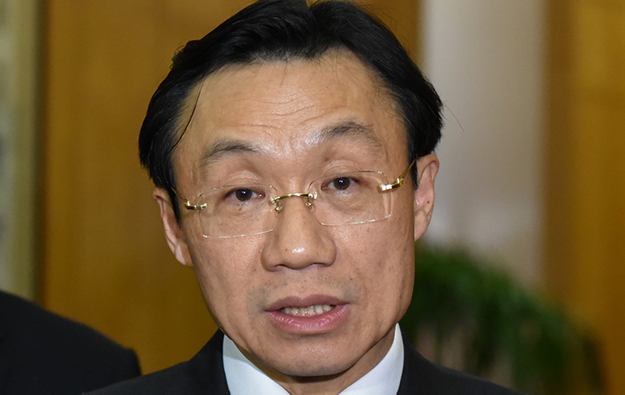 Macau has only about 4 percent of the enforcement officers the city’s Tobacco Control and Prevention Office would actually need in order to inspect the city’s many gaming floors properly and check compliance regarding new smoking rules that became fully active on January 1. So said the city’s Secretary for Social Affairs and Culture, Alexis Tam Chon Weng (pictured in file photo), on Tuesday during a plenary session of the Legislative Assembly.

Mr Tam was speaking when questioned on the topic by several legislators. From January 1, all smoking lounges in Macau casinos have to conform to enhanced technical standards and be approved by the authorities. In addition, tableside smoking was banned in casino VIP gambling rooms, the only places in the Macau market where tableside tobacco use had still been tolerated.

Complaints of continued smoking in casinos – particularly in or around some VIP areas – have been made recently by some Macau labour groupings.

There were currently only “67” enforcement officers from the tobacco control office available for checking casinos, Mr Tam told legislators.

Under the terms of their concession contracts, the casino operators are required to run their gaming businesses 24-hours-per-day, and have only been asked to deviate from that once – last year – in the modern era. There are 39 active casino venues in the city, according to data from the local casino regulator, the Gaming Inspection and Coordination Bureau. Many of the venues have either multiple gaming floors or multiple gaming areas, including VIP zones often physically separate from the main gaming facilities.

More than “1,880” patrolling tobacco control officers would be needed for effective round-the-clock checks in all of the city’s gaming venues, Mr Tam remarked. But to hire such a number of enforcement staff was also “unrealistic”, the official added.

Macau has statistical full employment, and competition for workers is fierce among employers.

The Secretary nonetheless pledged to legislators that the government would look into hiring more enforcement staff for smoking control tasks in casinos.

Speaking at Tuesday’s assembly meeting, Tang Chi Ho, head of the city’s Tobacco Prevention and Control Office, also highlighted some operational difficulties faced by his staff. The official alleged that in one instance a casino security worker immediately informed gaming operations colleagues of the arrival of  a tobacco control team, even before it had stepped into the property’s lobby.

Prior to the Legislative Assembly’s plenary session on Tuesday, representatives of Macau’s traditionalist labour group the Macau Federation of Trade Unions and its affiliate gaming-sector groups – led by the federation’s representative legislator Leong Sun Iok – had had meetings with the Gaming Inspection and Coordination Bureau and the Tobacco Control and Prevention Office.

At both of these gatherings with the Macau government departments, the attending labour group members claimed that the alleged violations of the casino smoking rules had been most commonly witnessed in some of the city’s VIP gambling rooms or their immediate facilities, according to press statements issued by the Federation of Trade Unions.

Gaming revenue at Paradise Co Ltd, an operator in South Korea of foreigner-only casinos, rose by 312.9 percent year-on-year, to KRW39.17 billion (US$27.6 million). But such revenue was down 22.4... END_OF_DOCUMENT_TOKEN_TO_BE_REPLACED