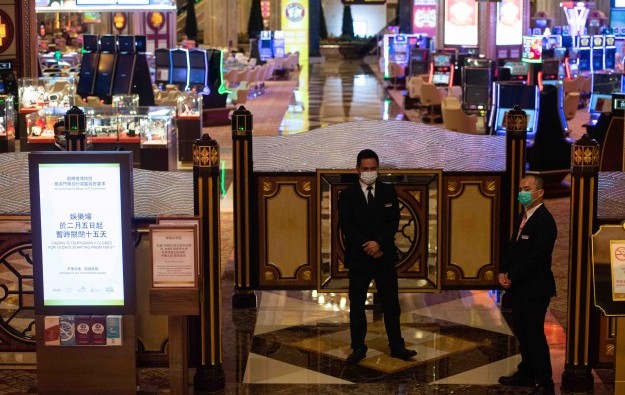 Macau casinos were to close with effect from the stroke of midnight on Tuesday for 15 days, said a senior government official at a media briefing in the afternoon that day.

The affirmation was from Lei Wai Nong, the city’s Secretary for Economy and Finance.

He said 41 gaming venues would shut as of that time. But hotels and restaurants at casino resorts will stay open, as there were sufficient safeguards in place, added the official.

His comments followed the meeting arranged at short notice between casino industry leaders and the government to discuss shuttering casinos in the light of three cases of coronavirus among local residents with no links to Hubei province on the mainland, the centre of the outbreak.

Brokerage Sanford C. Bernstein Ltd said in a note shortly before the specifics were confirmed, that even a two-week shuttering might lead to a 50 percent fall in casino gross gaming revenue (GGR) in the first quarter this year.

JP Morgan Securities (Asia Pacific) Ltd said also in a Tuesday memo that – taking into account the casino shutdown and the restrictions that had already been put in place by the mainland authorities regarding mainland residents visiting Macau – “February GGR is expected to drop roughly 75 percent to US$0.7 billion (versus US$2.8 billion originally)”. The institution added that this in turn would – based on its analysis – reduce annual GGR for the Macau market “by approximately 6 percent”.

A Chief Executive dispatch issued on Tuesday stipulated the suspension of gaming venues to be in effect on 00.00, February 5, 2020.

Secretary Lei noted during his late-afternoon briefing: “This is only a closure on the gaming venues of the tourism complex. Hotels and food and beverage venues can still continue, considering there are still visitors there. And we have sufficient risk control measures.”

The official stressed that safety of guests and casino staff should be prioritised, without worrying about the likely effect of “reduced gaming revenue”.

“Casinos have already been closing restaurants and other services over the past several days in light of tepid customer visitation,” noted the memo from Sanford Bernstein. “Whatever the details of the temporary shutdown are, the first quarter is obviously going to show awful results,” added the brokerage.

“Assuming only a two-week shutdown followed by some soft business resuming in late February and March, the first quarter could show GGR year-on-year decline of 50 percent,” the institution’s analysts said.

They added: “If casinos were to remain closed for the rest of the first quarter, GGR would show a year-on-year decline of over 70 percent.”

Secretary Lei said in his Tuesday afternoon update that nightclubs, cinemas, arcade venues and other places of entertainment would also shut. The closure of such venues was also stated in the Chief Executive dispatch.

The official also said the city’s six casino concessionaires had stated they would not cut salaries or request workers to take unpaid leave in the face of the current public health alert.

“As for the ninth case, there is no sign that she contracted the virus at the workplace,” said Mr Lei.

It had previously been confirmed on Tuesday by the authorities that patient nine had made a visit to patient eight – a Macau resident – on January 24. The patient nine had also – in her recent travel history – been to neighbouring Zhuhai in Guangdong province on the mainland for a dinner and an orchestra event, according to Leong Iek Hou, a Health Bureau coordinator, speaking at the Tuesday government briefing.

The 10th patient was a 59-year-old male – also a Macau resident – employed as a driver on a shuttle bus service of casino operator SJM Holdings Ltd. On January 25, the man had made a private visit to Guangzhou in Guangdong, stated Ms Leong.

As of information confirmed by officials, the shuttle bus operated by the 10th patient covered stops at: Pac On Ferry Terminal, Taipa, and Macau International Airport; with the shuttle route serving the Grand Lisboa casino hotel, Hotel Lisboa, and Casino Oceanus, three Macau peninsula properties. He also worked a route between Macau’s Border Gate with neighbouring Zhuhai and those same SJM Holdings properties.

At an earlier press briefing on Tuesday, Macau’s Chief Executive Ho Iat Seng said that his administration did not intend to “close border checkpoints” of the city, considering these channels had to remain open for the daily commute of many cleaning and security workers employed in Macau, and for the supply of food to the city. But he did not rule out the possibility that some of the borders could face temporary closures.

Mr Ho said also that the next “seven to 10 days” could mark the high point for cases of infection in Macau, adding that authorities needed to be especially vigilant in order to prevent the spread of the novel coronavirus.

The decision by the Macau government to grant fresh 10-year licences to each of the city’s six incumbent casino operators has been welcome by top management at those firms. Each of the concessions... END_OF_DOCUMENT_TOKEN_TO_BE_REPLACED