Casinos not to instantly shut if Covid-19 found in Macau: govt 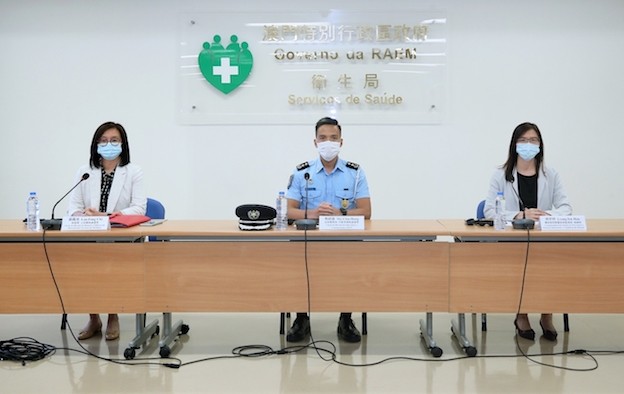 Macau casinos will not necessarily be closed immediately if new cases of Covid-19 infection are detected in the city, said on Wednesday an official from the city’s Health Bureau. Macau has not recorded any local cases of infection for more than four months, according to the government.

If any fresh Covid-19 cases were detected, the authorities would implement community restrictions, but an eventual suspension of casino operations would depend on an “assessment” by the authorities of the potential risk for public health of keeping gaming venues open, said Health Bureau official Leong Iek Hou (pictured, right), during a Wednesday regular press briefing on Macau government’s response measures to Covid-19.

“If there is a new case of community transmission [of Covid-19] in certain areas [of Macau], we will define such areas as ‘medium’ or ‘high-risk’ areas,” said the official. “But that doesn’t mean that if a local case occurs – one which is not related with casinos – we will immediately close” the city’s gaming venues, she added.

Ms Leong said additionally that the local authorities had no plans to ease a set of special guidelines for Macau’s casino industry, adding that potential adjustments would only be considered after the pandemic eases, including availability of a vaccine against the novel coronavirus.

A set of special guidelines for the city’s casinos – including permissible density of seating for customers at gaming tables, and minimum space between tables in use – came into force on February 20 after a 15-day market-wide closure to prevent local spread of Covid-19. Taken together, the guidelines have amounted to a scenario where each venue’s operational gaming capacity has been more than halved.

The Health Bureau official stated that the Macau government already had in place contingency plans for the eventuality of fresh Covid-19 cases being detected in the city, particularly following the resumption of tourist visas to Macau from mainland China.

Ms Leong said such plans would take into consideration several factors, including the potential risk and impact on the community of a Covid-19 outbreak, the number of people infected and the place where it eventually occurred.

Authorities in mainland China’s Guangdong province are set to resume on August 26 the issuance of tourist visas to Macau, including visas for package tour groups and for independent travel under the country’s Individual Visit Scheme (IVS). The rest of the provinces in mainland China are to resume issuing tourist visas to Macau from September 23 onwards, just ahead of the so-called ‘October Golden Week’.