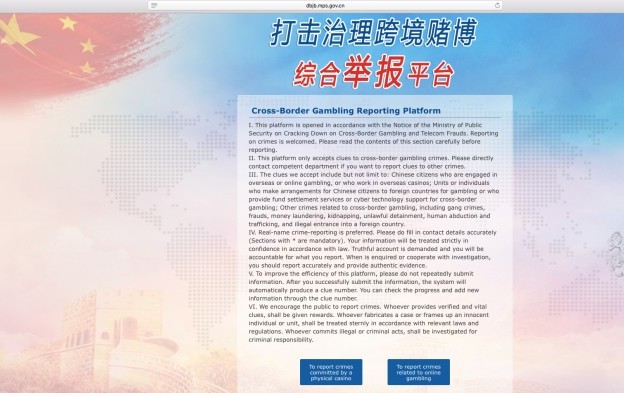 China’s Ministry of Public Security has launched a web-based platform (pictured) in Chinese and English, for the public to report “cross-border gambling” as well as “telecom frauds”. Aside from covering online gambling – a constant irritation to the Chinese authorities when aimed at its citizens – it also includes a section to “report crimes related to a physical casino”.

In that section, users are asked whether a gambling licence has been issued for the venue they are reporting, and whether “online gambling services” are also provided by the venue. It also asks the reporting person to list “major unlawful acts” and “clues to the case”.

The web-based platform can be viewed at http://dbjb.mps.gov.cn.

A number of casino jurisdictions neighbouring China permit so-called proxy gambling within casinos, where customers not physically present in a casino and possibly in a place outside the casino jurisdiction, can place bets via a nominee or ‘proxy’ who is on site, according to some industry consultants. Macau doesn’t allow the practice.

Some jurisdictions, such as the Philippines, permit online streaming from video studios, of casino-style table games aimed at overseas consumers. China has already complained to the Philippines about that. In September last year the Philippine leader President Rodrigo Duterte said the country had no plans to ban such business.

A recent notice from China’s Ministry of Public Security said that individuals involved in gambling were encouraged to report cross-border gambling crimes, and that the Chinese authorities would strive to exercise leniency to the reporting individuals, should they have been caught up in something illegal.

On the Chinese mainland, the operating or promotion of casino gambling in online or bricks and mortar form is illegal, as is the marketing within the mainland of gambling operations based outside the mainland’s borders, including any play in the Chinese Special Administrative Region of Macau.

The mainland authorities mandate limits on the amount of money per trip that can be taken into Macau by mainland residents, but in the past people have found loopholes. In recent years the Chinese authorities have also been trying to clamp down on money moved from China for gambling in foreign countries.

Earlier this month the People’s Bank of China had announced the holding of talks with other Chinese government departments on combatting the “cross-border” flow of funds for gambling.

The new website’s section inviting the public to report crimes “related to online gambling”, asks users to give the name of the problematic site; the channels via which the gaming site was publicised or recommended; and whether the operation of the site is dependent on any physical gaming venue, along with “clues” relating to the alleged crime.

The platform is said to be open to information on Chinese citizens including those who are “engaged in overseas or online gambling”, or “units or individuals who make arrangements for Chinese citizens to visit foreign countries for gambling or who provide fund settlement services or cyber technology support for cross-border gambling”.

The ministry also stated that it would offer a reward – of a type not specified – to encourage the public to report crimes and provide verifiable clues. The person reporting an alleged crime can also view via the platform the progress of any resulting investigation, by keying in a report-specific code number generated via the platform.

The launch of the reporting platform had also been publicised on the official website of the Chinese embassy serving Cambodia, and the website of China’s consulate general in Vietnam’s Ho Chi Minh City.

On Monday, the Ministry of Public Security published an article on its official website stating that it would take a “zero-tolerance” approach to cross-border gambling activities and related crimes, and vowed to crack down on any capital, human resource, technology and promotion support that might be found in mainland China for such activities.

In the same article, the ministry mentioned that security forces nationwide had dealt with a total of 257 criminal cases related to alleged cross-border gambling and arrested over 11,500 suspects in mainland China since late February. The ministry also listed what it called “classic” crimes related to cross-border gambling activities detected so far this year. Most related to alleged support services for online gaming operations and some were in Zhuhai in Guangdong province next door to Macau. Offences were also detected in Shenzhen next door to Hong Kong, as well as elsewhere in China.

Macau’s unemployment rate, and the resulting social pressure, could potentially result in “instability” regarding the city’s security, said the Office of the Secretary for Security in... END_OF_DOCUMENT_TOKEN_TO_BE_REPLACED