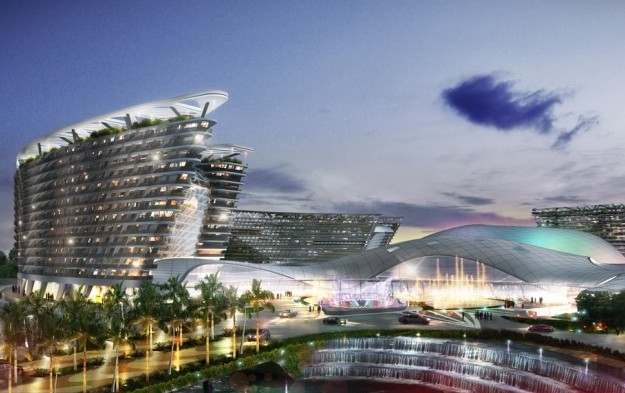 The involvement of two Chinese construction firms in the Aquis Great Barrier Reef Resort casino scheme (pictured in a rendering) in Cairns, Queensland, is likely to be confirmed “within the coming month” said The Australian newspaper on Monday.

The Chinese firms – state-owned CCCC International Holding Ltd and privately-held Tandellen Group Ltd – were reported a week ago to have already linked with Aquis’ mastermind Tony Fung Wing Chung to buy for AUD40 million (US$30 million) another site on Queensland’s Gold Coast.

Aquis Great Barrier Reef Resort in Cairns has been previously described as a AUD8-billion scheme, and was submitted as a formal proposal to the Queensland state government in Australia in July 2013.

An entity called Aquis Resort at The Great Barrier Reef Pty Ltd – said at the time of the submission to be the proponent of the Aquis plan – is wholly and solely owned by Mr Fung, who was described in the submission as a Hong Kong resident and “long term investor in Queensland”.

The Aquis project’s supporters have claimed it could directly create 10,000 new jobs in Cairns, a town near Australia’s Great Barrier Reef. The latter is a protected ocean area listed as a UNESCO World Heritage site. Cairns has a population of 160,000 and an economy largely reliant on tourism.

Mr Fung had indicated in a November 2014 open letter to the community that he might walk away from the Aquis Resort scheme project because of “increasing complexity and difficulty” in approvals processes. That was followed by another open letter in April 2015 saying that Mr Fung and his interests remained “totally committed” to the project.

Mr Fung also owns a venue called the International Beach resort on Queensland’s Gold Coast. In August last year he separately completed the reverse takeover of a firm called Discovery Resources Ltd, in order to float his gaming asset Casino Canberra – a gambling venue based in the Australian Capital Territory – on the Australian Securities Exchange.

In April 2015, CCCC International completed its acquisition of John Holland Group – described as one of Australia’s largest civil construction firms – from the then Leighton Holdings, a firm now known as CIMIC Group Ltd.

The World Bank announced in 2011 that – due to bid rigging by a CCCC International unit the parent had acquired in 2006 – the CCCC International group was being debarred from all World Bank projects. Joe Hockey, the Australian federal treasurer at the time of the takeover deal for John Holland, said he was “satisfied that this investment is not contrary to our national interest”.

The Macau government announced on Thursday the cancellation of a plan for a nucleic acid test certificate requirement with 48 hour validity, for casino staff, casino customers and official visitors... END_OF_DOCUMENT_TOKEN_TO_BE_REPLACED