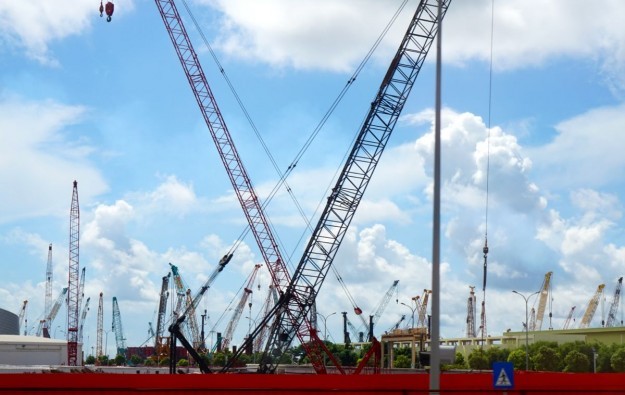 It is common in the building industry to have a pipeline of projects in order to smooth cash flow and to avoid laying off workers. Company-wide, China State’s backlog of regional projects at its international unit – judged by value – rose a more modest 19 percent year-on-year.

Out of an aggregate value for the firm’s Macau projects in progress – tallied at HKD13.95 billion (US$1.8 billion) as of August 31 – a total of HKD11.72 billion, or 84 percent of all work in progress, was described as backlog. The HKD11.72 billion value was up from HKD4.22-billion worth of backlog one year before.

Aside from the issue of importing enough construction workers to Macau – the city’s unemployment rate is only 1.7 percent – developers of casino resorts in Cotai are also facing problems with getting construction licences on time. Sands China Ltd has recently said in filings that it has been waiting on government permits for certain Cotai construction works. MGM China Holdings Ltd additionally mentioned question marks over timing of project openings linked to receipt of government permits. The firm’s MGM Cotai project is scheduled to open in 2016.

China State Construction International is the main contractor for the work, with a contract valued at HKD10.5 billion.

There was no suggestion in China State’s filing that either the MGM Cotai or Wynn Palace schemes were part of China State’s Macau backlog.

Wynn Palace is scheduled to open in the first half of 2016. Wynn Macau Ltd reiterated on Wednesday in its 2014 interim report that an early completion bonus for “achievement of substantial completion on or before 25 January 2016 will be paid to the general contractor if certain conditions are satisfied.”

As of August 31, the on-hand contract value of all China State Construction International’s projects amounted to approximately HKD150.68 billion, among which the backlog was approximately HKD93.80 billion. The firm said that “meets the group’s expected works in the next three years”.

The International Monetary Fund (IMF) expects Macau’s economy to continue to expand in coming years, after an estimated 17-percent growth in 2021, “helped by the partial recovery of the gaming... END_OF_DOCUMENT_TOKEN_TO_BE_REPLACED