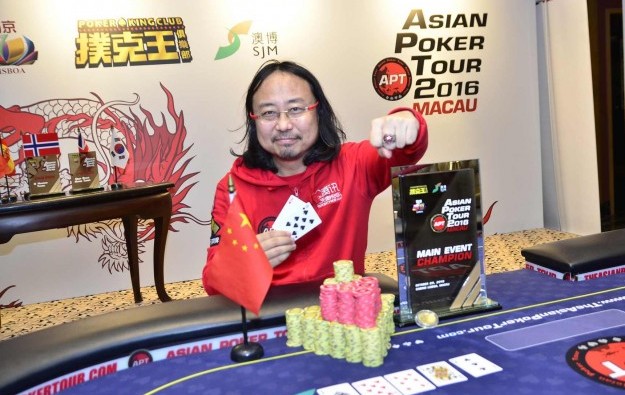 Chinese poker pro Guo Dong was the winner of the main event of the Macau leg of the 2016 edition of the Asia Poker Tour. The player took home HKD530,000 (US$68,300), according to a Wednesday press release from the tournament organisers.

The main event featured a total of 108 entries and a total prize pool of HKD2.07 million, the release added.

The tournament was held in partnership with the Poker King Club and Macau-based casino operator SJM Holdings Ltd, and took place at Casino Lisboa, a SJM Holdings’ property.

The entire Macau leg of the Asia Poker Tour was held from October 19 to 25. The tour had returned to Macau after a three-year absence.

The next tournament of the Asia Poker Tour 2016 will take place between November 15 and 24, in Noumea, New Caledonia, a French-controlled archipelago in the South Pacific.

The Asia Poker Tour was founded in 2008 and held its first event in May that year, in Manila. It has staged several major events and numerous smaller tournaments mainly in the Asia Pacific region. The tour has visited Macau, South Korea, Cambodia, India, Australia, London in the United Kingdom and Mauritius.

Macau is entering a “new phase” in its approach to dealing with Covid-19, said on Thursday the official in charge of health policy, after nearly three years that has seen the tourism and casino... END_OF_DOCUMENT_TOKEN_TO_BE_REPLACED