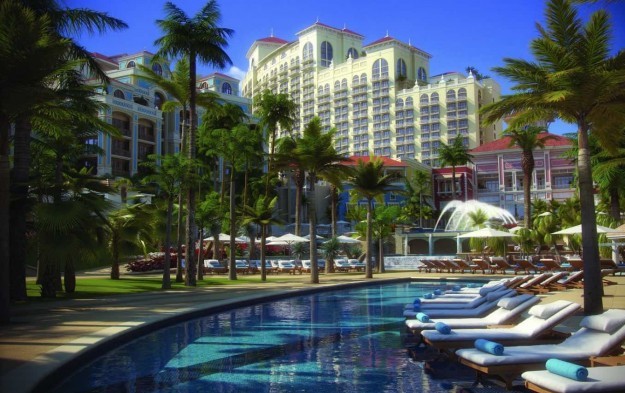 A casino was among the facilities opened for a “preview” period at the Baha Mar gaming resort in the Bahamas on Friday.

A press release from the previously stalled resort didn’t clarify whether all the gaming facilities were available for paying customers during the preview period.

It had been reported in early April that the gaming licence for Baha Mar (pictured), had been granted 17 days before its scheduled phase-one soft opening.

The statement said the “preview” also included the Grand Hyatt Baha Mar hotel; the Royal Blue Golf Club; and the Baha Mar Convention, Art and Entertainment Center. Friday’s press release described the multi-phase project as a “US$4.2-billion integrated resort development”. It had been described by earlier developers as a US$3.5-billion scheme.

The Tribune, a local newspaper, reported in its Saturday edition – citing the resort’s president Graeme Davis as the source – that many of the guests in the hotel were not paying customers, but invited for a “preview period”. He was also quoted as saying the official date for guest reservations was scheduled for May 29.

Grand Hyatt Baha Mar has two towers with an aggregate of 1,800 rooms, including 230 that are suites and contain either one, two or three bedrooms.

According to Friday’s press release, phase two of Baha Mar will be marked by the launch of an SLS-branded hotel in the autumn; and phase three by an “enhanced and expanded” Rosewood Baha Mar hotel in spring 2018.

The original developer of Baha Mar – Baha Mar Ltd, led by businessman Sarkis Izmirlian – filed for Chapter 11 bankruptcy protection in a Delaware court in the United States on June 29, 2015, claiming it faced debts of US$2.7 billion.

Privately-held Hong Kong conglomerate Chow Tai Fook Enterprises Ltd – an investor in casino resorts in Macau, Australia and Vietnam – confirmed in December that it had signed an agreement to own and operate Baha Mar. It said at the time that it planned to invest US$200 million to support “pre-opening activities as well as the redevelopment of the … beachfront Crystal Palace Casino Hotel site, and the development of additional family-friendly amenities, entertainment venues and offshore island facilities”.

Chow Tai Fook Enterprises acquired a controlling stake in a US$4-billion Vietnam casino project in September 2015. The company is also involved in the development of a casino resort in Brisbane, the capital of the Australian state of Queensland.

A Macau court was offered evidence on Monday, including of recordings from police-wiretapped telephone conversation, that the prosecution says proves the direct involvement of Levo Chan Weng Lin... END_OF_DOCUMENT_TOKEN_TO_BE_REPLACED