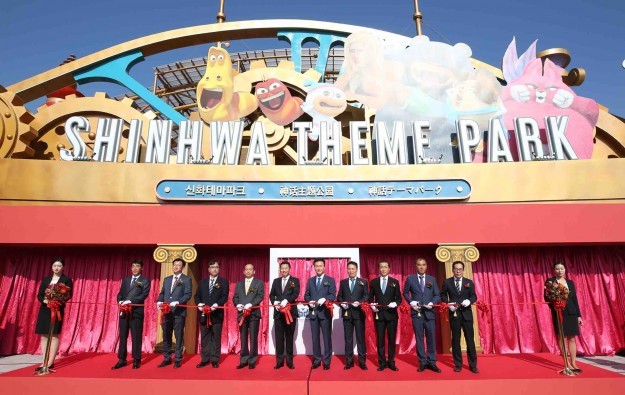 China’s Consul General to Jeju Island was among the guests at the launch on Saturday of a theme park at a Chinese-backed casino resort on the semi-autonomous South Korean island.

The foreigner-only casino at Jeju Shinhwa World, is due to open later, on December 8, according to an announcement last month by the scheme’s promoter, Landing International Development Ltd.

Consul General Feng Chun Tai (pictured fourth from left) attended the resort’s Saturday launch of a locally conceived attraction – Shinhwa Theme Park. A Hollywood-focused theme park called Lionsgate Movie World is due to be operating by the end of 2019, according to Landing International.

Mr Feng was joined at the ceremony by Jeon Seong-tae, Vice Governor of Jeju (fifth from right), and Yang Zhihui, chairman of Landing International (fifth from left).

Mr Yang said in a prepared statement accompany in the press release about Saturday’s event: “The opening of Shinhwa Theme Park signifies another key milestone for Jeju Shinhwa World which sets to offer the first world-class leisure and entertainment facilities in Jeju.”

According to the release, the gaming resort as a whole will cover 2.5 million sq metres and will have more than 2,000 “premium” hotel rooms. The firm has said previously that its total investment in the project amounts to more than US$1.5 billion.

In late August the company had stated in a filing to the Hong Kong Stock Exchange that completion of Jeju Shinhwa World would take place “progressively from the fourth quarter of 2017 onwards,” with the project “completed by 2019”.

The firm had already announced an initial-phase opening in April, with the launch of a 344-unit serviced resort condominium called Somerset Jeju Shinhwa World.

In November, a facility called YG Town, operated by South Korean entertainment agency YG Entertainment – which represents entertainers including K-pop singers – is due to open at the resort and will feature a themed bar and café.

Chinese visitors are a key target market of the new resort, and Chinese tourists to Jeju Island are entitled to visa on arrival if they arrive direct by air or ship from a city outside South Korea.

It is likely that Macau will shortly have a third round of citywide centre-based Covid-19 testing in little more than a week, after the results so far of a second mass test – that was due to finish... END_OF_DOCUMENT_TOKEN_TO_BE_REPLACED