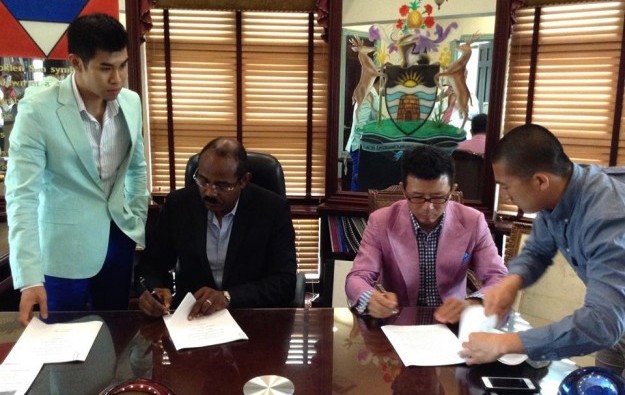 Yida International Investment Antigua Ltd, backed by Chinese investors, on Saturday signed a memorandum of agreement with the new government of Antigua and Barbuda to build a US$740-million casino resort in the Caribbean nation.

The deal was signed one day after Gaston Browne became prime minister, and following eight hours of negotiations. Yida International was represented in the signing ceremony (pictured) by director Yida Zhang.

“I promised the people that my administration would bring the type of investments to the country that will transform Antigua and Barbuda into an economic powerhouse and I am serious about that promise,” Mr Browne said in a statement published on the government’s official website.

Yida International is proposing to build a mega complex on outlying Guiana Island and nearby parcels of land. Aside from a casino, the project includes five luxury hotels, 1,300 residential units, a conference centre, a 27-hole golf course, marina and landing facilities, and a retail and sports facility.

The company is expected to invest over US$74 million annually in the Antigua and Barbuda economy over the next 10 years, said the government website.

Guiana Island was previously owned by U.S. financier Allen Stanford, the Associated Press reports. He was arrested in 2009 by U.S. authorities for involvement in an alleged Ponzi scheme and later convicted and sentenced to 110 years in prison. Yida International will have to buy the land from liquidators handling Mr Stanford’s assets, the news agency adds.

Most of Macau’s casino operators are likely to generate positive free cash flow in the first quarter, given the robust recovery level of mass-market gross gaming revenue (GGR) in January, relative... END_OF_DOCUMENT_TOKEN_TO_BE_REPLACED