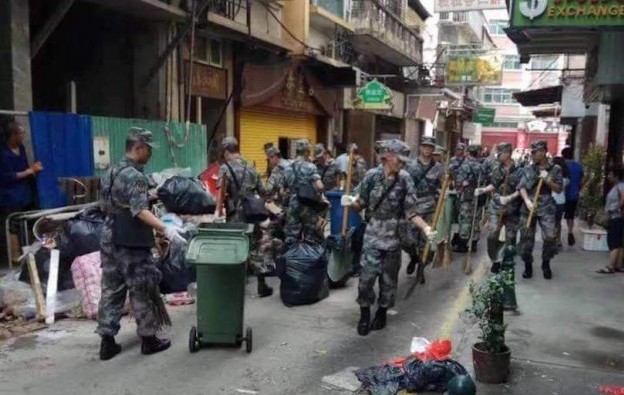 Personnel from the People’s Liberation Army Garrison in Macau on Friday joined the clean up operation for Typhoon Hato, following a request to Beijing from the city’s Chief Executive, confirmed the local government.

A statement from the Macau authorities said the intervention was at the behest of Fernando Chui Sai On, and in line with the terms of Macau’s Basic Law, agreed between the Chinese and Portuguese governments prior to the handover of the territory in 1999.

Typhoon Hato struck Macau on Wednesday morning, with wind speeds of more than 200 kilometres per hour (124 mph) according to the local weather bureau.

It contributed to the death of 10 people and injured more than 240, as well as damaging some Macau casino resorts and causing flooding in certain districts.

Huge piles of refuse and flood-spoiled goods from shops and offices were piled in some of the streets on Macau peninsula up to Thursday night. Water supply to many homes was cut for 36 hours following the storm.

At a Thursday evening press conference, Mr Chui had apologised to the public for any shortcomings regarding the local government’s work in handling the aftermath of the storm. Fong Soi Kun, the head of the city’s Meteorological and Geophysical Bureau resigned on Thursday, in the wake of the Typhoon Hato disaster, which the government said was the worst storm recorded for 53 years.

Some homes had still not had water supply restored by Friday morning.

The Macao Government Tourism Office said in a press notice issued on Thursday that – of 64 local hotels in the three-star to five-star category that it had canvassed – only 36 confirmed having power and water as of that time.

The tourism bureau added it would “continue to conduct a scrutiny of hotel room prices and will impose penalties upon any irregularities according to stipulated regulations”. Rumours had been circulating of some hoteliers asking extremely high prices for rooms with fully-functioning utilities.

In a phone interview with Hong Kong Chinese-language newspaper Apple Daily published on Thursday, Wilfred Wong Ying Wai, president and chief operating officer of Sands China Ltd, said the firm’s Sands Macao casino hotel on the city’s peninsula had suffered a roof leak but no flooding. He added he would authorise partial resumption of operations on Thursday night or Friday daytime if possible and hoped all issues could be fixed within days.

The executive stressed his company had not increased hotel room rates during the typhoon and said he was “very angry” that rumours of industry price hikes had been circulating.

Mr Wong added there was no flooding at either the Venetian Macao or the Parisian Macao, two of the company’s properties on Cotai.

“I walked [the two properties] twice last night [Wednesday]. There wasn’t even one single drop of water,” he said.

The report didn’t mention the status of operations at the group’s Sands Cotai Central venue.

“As much as the impact of Hato is likely a one-off, the resulting disruptions will still likely have a short term impact on Macau’s gaming/gaming-related businesses toward the tail-end of August,” said a Thursday note from Jamie Soo and Adrian Chan of Daiwa Securities Group Inc. Several brokerages had earlier mentioned the likelihood the effects of the storm could shave several hundred basis points off the estimates for Macau’s year-on-year growth in gross gaming revenue for August.

Daiwa stated in its note, referring to Macau peninsula: “Avenida da Amizade, the main avenue where a number of casinos are located (including StarWorld, Wynn [Macau], among others), was completely flooded; casino transportation services [were also] halted as a result.”

The brokerage added: “A number of casinos were also running on backup generators and operating at very limited capacities (some even witnessed blackouts). Several luxury hotels suspended guest check-in and check-out.”

Hoffman Ma Ho Man, deputy chairman of Success Universe Group Ltd, an investor in the Ponte 16 casino resort at the Inner Harbour district, told Apple Daily that the gaming area on the ground floor had suffered flooding to a depth of up to three feet (0.91 metres). He estimated it would take several days for the firm to replace sodden carpets, but hoped the casino facility could partially reopen more quickly.

The issue of industrial relations between casino employers and local labour groupings has also returned to the agenda following Typhoon Hato, with some seats in the city’s Legislative Assembly due to be contested by direct election in September.

Cloee Chao, director of gaming worker group Professional for Gaming of New Macau, claimed to GGRAsia that SJM Holdings Ltd and MGM China Holdings Ltd were the only two Macau casino operators her group was aware of that allowed casino employees paid leave of absence on Wednesday when the typhoon struck the city. She said her group would hand a petition to Macau’s Labour Affairs Bureau, on that and other complaints.

Galaxy Entertainment added there would be – on a backdated basis – “compassionate paid leave of absence for team members who could not come to work on August 23 to August 25 due to the typhoon, and no deductions to salary will be made for arriving late during this time”.

Meanwhile, the Hong Kong Observatory said a tropical depression forming near the Philippines had strengthened into a tropical storm on Friday, and it forecast that it could develop into a severe tropical storm by Sunday. The new storm, named Pakhar, is possibly headed for southern Guangdong province, passing close to Macau and Hong Kong. Nonetheless, the maximum strength of Pakhar is expected to be below that of Hato.

Most of Macau’s casino operators are likely to generate positive free cash flow in the first quarter, given the robust recovery level of mass-market gross gaming revenue (GGR) in January, relative... END_OF_DOCUMENT_TOKEN_TO_BE_REPLACED