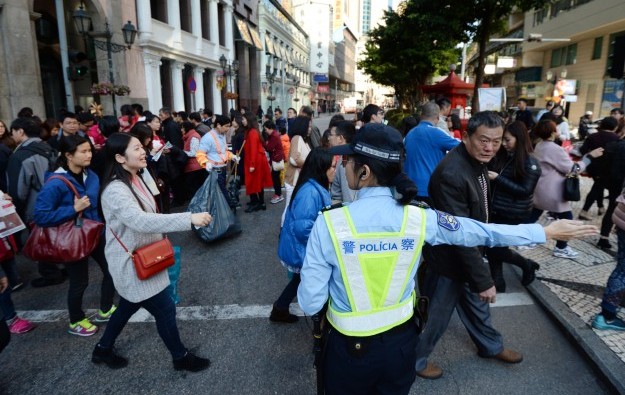 Visitor arrivals to Macau during the Chinese New Year holiday period are so far up by 7.5 percent from a year earlier, according to the latest data available.

The 2016 Chinese New Year period in Macau lasts until the weekend. The annual holiday is usually a peak season for the city’s casino industry as hundreds of thousands of mainland Chinese tourists take advantage of the week-long break to visit Macau.

There is however no direct connection between overall tourism arrivals and casino gross gaming revenue (GGR) in Macau. While monthly GGR has been dropping by double-digit percentages in year-on-year terms since June 2014, the number of overall tourists declined by a more modest 2.6 percent – to about 30.7 million visitor arrivals – in 2015.

“Traditionally, the first two or three days are always quieter, but business is looking very strong for the rest of the Chinese New Year period,” Mr Bowie said, quoted by public broadcaster TDM.

Last month, Maria Helena de Senna Fernandes, director of the Macao Government Tourism Office, told media in Macau she expected the total number of visitors to Macau in 2016 to rise by 1 percent year-on-year – under an “optimistic” estimate. She said the number of all visitors to the city during Chinese New Year 2016 was likely to rise by the same percentage, compared to the equivalent holiday period in 2015.

During 2015’s week-long holiday period for Chinese New Year, Macau registered almost 1.03 million visitor arrivals (including inward travel by imported workers and other people living in Macau under different visa arrangements), a decrease of 2.4 percent over the corresponding period in 2014.

International casino operator Las Vegas Sands Corp has been ranked as the most sustainable firm in the global casino sector, according to the 2023 edition of the S&P Global Sustainability... END_OF_DOCUMENT_TOKEN_TO_BE_REPLACED