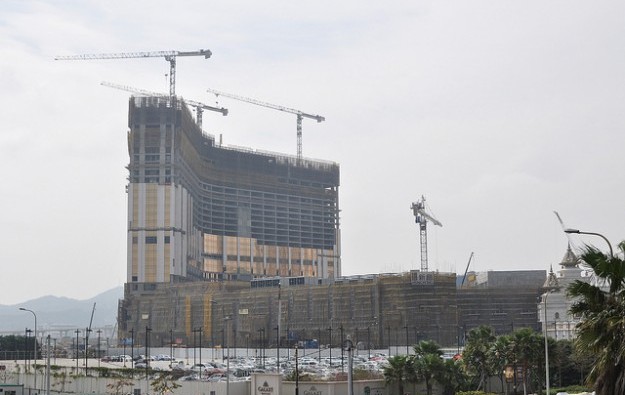 A CNY 2015 launch could allow GEG to grab table quota under the Macau government’s table cap ahead of rival operator Melco Crown Entertainment Ltd, which in its latest earnings call today said it expected a “mid-2015” opening for its majority-owned Studio City project immediately to the south of Galaxy Macau.

Were a CNY opening possible for Galaxy Macau Phase 2, it raises the question of how many tables the property might have at launch.

In December 2012, Galaxy said it hoped to have 500 tables at Galaxy Macau Phase 2. But since then the questions of the table cap and the city’s labour shortages (only Macau permanent residents can be table dealers) have made the table quota issue more sensitive politically. In other comments by senior management, GEG has said it aspires to operate a minimum of 1,000 tables across all new phases of Galaxy Macau between 2015 and 2018.

In June 2013, the casino operator said that it was increasing its capital budget on Galaxy Macau Phase 2 by around 23 percent to HK$19.6 billion (US$2.5 billion) citing local inflation in materials and construction labour costs.

That, combined with any suggestion of non-optimal table numbers for Galaxy Macau Phase 2 at opening could put some downward pressure on the project’s capital returns. But with gross gaming revenue growing market wide by 19 percent year-on-year in 2013, and GEG holding a net cash end balance of nearly HK$9.03 billion as of December 31, 2013, according to its annual earnings statement, the firm arguably has some room for manoeuvre.

GEG’s deputy chairman Francis Lui Yiu Tung last month told the Chinese-language Macao Daily News that the firm would be re-opening GEG-licensed Grand Waldo next door to Galaxy Macau “early next year”. Galaxy confirmed in July last year that it had bought the casino property from Hong Kong-listed Get Nice Holdings Ltd and planned to refurbish it.

But GEG hasn’t so far specified whether the revamped Grand Waldo will have gaming. At the time of its closure last June the venue had 45 live-dealer tables. GGRAsia understands from sources that those tables were quickly reallocated to the rest of GEG’s operations. Even were those tables to be clawed back from current operations they wouldn’t be sufficient to populate Galaxy Macau Phase 2.

If however the new-look Grand Waldo were to be for non-gaming it would have the advantage for GEG of making a public statement in support of the Macau government’s drive for diversification from gaming in the tourism sector and in the general economy. It could also make it politically easier for the government to issue Galaxy Macau Phase 2 with new table quota.

Other indicators point to the possibility of a Galaxy Macau Phase 2 opening sooner than officially advertised. GGRAsia has learned that air conditioning units are already on order for Phase 2 – in Macau’s extremely humid climate usually a sign that an operator is ready to fit out the interior of a property. Lead times for ordering air conditioning plant on the scale required by Galaxy Macau Phase 2 are typically three to four months, according to construction industry sources.

Chinese New Year falls on February 19 in 2015. Assuming the aircon would need to be in place only at the soft furnishings stage of the property’s fit out, that would allow – starting from now – four months for dry wall and electrics, and three months for soft furnishings (carpets, wallpaper, upholstery lighting units etc). Industry professionals tell GGRAsia that’s just about do-able for a property of that scale.

Additionally, Galaxy has already started hiring senior people for Galaxy Macau Phase 2 – though that’s not so surprising given that typically casino executives at vice president level and above may have non-compete or cooling off clauses in their contracts requiring them to take gardening leave prior to joining a rival operator.

GGRAsia understands that Scott Milburn, a former vice president of table games at Melco Crown Entertainment’s City of Dreams on Cotai, is returning to Macau from Crown Melbourne in Australia. He will take up a senior executive role at Galaxy Entertainment Group’s Galaxy Macau Phase 2, sources have confirmed to us. It will be his second stint in Macau.

According to Mr Milburn’s page on Linkedin.com, a social media site for professionals, he was initially at Crown Melbourne from 1994 to 2006, where he rose to V.P. of international business development.

He then joined MCE’s Crown Macau (now Altira) in 2006 as V.P. of table games, before moving up the road to CoD in 2008 in the equivalent role. In 2010 he returned to Crown Melbourne, for his current role as general manager of the table games premium & VIP business.

Bloomberry Resorts Corp – the operator of Solaire Resort and Casino (pictured) in the Philippine capital Manila – on Wednesday announced in a series of filings, that an aggregate of just over 7.9... END_OF_DOCUMENT_TOKEN_TO_BE_REPLACED