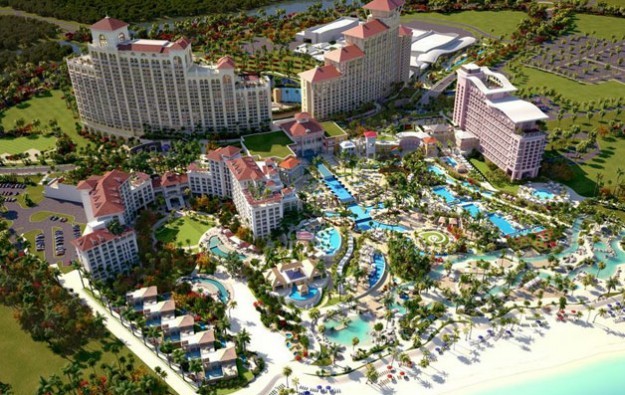 Hong Kong-based Chow Tai Fook Enterprises Ltd, an investor in casino resorts in Macau, Australia and Vietnam, says it is in talks to acquire Baha Mar (pictured in a rendering), a stalled casino resort project in the Caribbean archipelago of the Bahamas.

The company “has applied to the government of the Bahamas for approval as a proposed investor and acquirer of the Baha Mar Resort,” the firm said in a press release last week.

“Chow Tai Fook Enterprises is looking forward to having Baha Mar join its portfolio of world-class integrated resort development projects,” said the company’s chairman, Henry Cheng Kar Shun, in a statement. “We are fully committed to this project and plan to hire as many Bahamians as possible to work at the property,” he added.

Chow Tai Fook Enterprises is also involved in the development of a casino resort in Brisbane, the capital of the Australian state of Queensland.

The Hong Kong company did not provide any financial details regarding its efforts to acquire Baha Mar, but said it would invest heavily ahead of the official deal completion through pre-opening activities and employment.

“Chow Tai Fook Enterprises is dedicated to the successful opening of Baha Mar and will work with the government to achieve the goal of a phased opening,” the firm said.

The original developer of Baha Mar – Baha Mar Ltd, led by businessman Sarkis Izmirlian – filed for Chapter 11 bankruptcy protection in a Delaware court in the U.S. on June 29, 2015 claiming it faced debts of US$2.7 billion. But the Commonwealth of the Bahamas Supreme Court rejected an application seeking approval for the recognition on the bankruptcy orders issued by a judge in the United States.

In its latest press release, Chow Tai Fook Enterprises said it is already in discussions with hotel brands previously involved in the Baha Mar project. The company also intends to bring its own subsidiary, Rosewood Hotel Group, as a luxury hotel operator at Baha Mar, it added.

The imminent return of package tours from mainland China will not only help boost Macau’s tourism businesses, but is also expected to help casinos gain more foot traffic in their mass gaming... END_OF_DOCUMENT_TOKEN_TO_BE_REPLACED