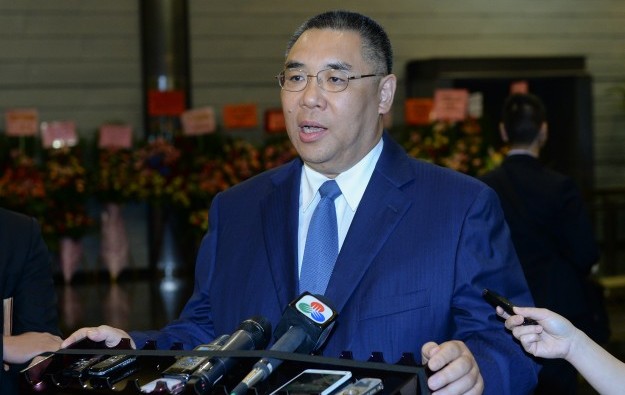 Mr Chui however confirmed that if Macau’s GGR tally for July comes in at around MOP18 billion (US$2.25 billion), his government would introduce austerity measures to control spending, according to an official statement on Tuesday.

A similar warning had already been made over the weekend by Macau’s Secretary for Economy and Finance, Lionel Leong Vai Tac.

A number of investment analysts have privately queried whether Macau’s talk of spending cuts to the public budget might be related to the bear markets currently being experienced in mainland China shares and Kong Kong shares. On Monday, the Shanghai Composite Index shed 8.5 percent, its biggest one-day fall since 2007.

But earlier this month, Secretary Leong specifically addressed the question of what exposure the Macau government had to investment in China shares. He told local media that of the MOP350 billion assets under the Macao Financial Reserve, only MOP7.6 billion – 2 percent – was in shares listed in mainland China and Hong Kong.

Mr Leong stated the Macau government had not lost any of the money invested in those stock markets.

The Monetary Authority of Macao in June said that in the first five months of 2015 the city’s financial reserve had generated profit of around MOP6.9 billion, representing an annual profit rate of 5 percent. It added that only 10 percent of all public monies invested was in shares.

The Macau government has set a minimum MOP18.35-billion bottom line for monthly casino GGR in 2015. If results fall below that level, local authorities will mull the introduction of austerity measures.

In June, monthly GGR in Macau had already fallen below the MOP18.35-billion level – when it stood at just MOP17.4 billion. Casino GGR has fallen for 13 consecutive months when judged year-on-year.

Estimates released on Monday by several brokerages and investment banks covering Macau gaming hinted that July GGR will come in at around MOP18.4 billion to MOP18.5 billion, representing a year-on-year decline of about 35 percent. The estimates, by Sanford C. Bernstein Ltd, Sterne Agee CRT, Wells Fargo Securities LLC and UBS Securities Asia Ltd, were based on unofficial industry returns for the first 26 days of the month.

The gaming sector is the major source of Macau’s fiscal revenues. The government levies an effective tax rate of 39 percent on casino GGR – 35 percent in direct government tax, and the remainder in a number of levies to pay for a range of community good causes.

The Macau government fiscal surplus was down by 58.3 percent year-on-year in the first half of 2015 to MOP25.22 billion as public revenue kept falling at a time when public expenditure went up.

In his Tuesday comments, Mr Chui said the government’s social policies would not be impacted even if officials introduce spending cuts. He also added that the city’s reserve fund would be enough to face any unexpected financial crisis related to the ongoing economic changes.

Mr Chui said it was normal for Macau’s economy to be undergoing an economic adjustment period following a decade of strong growth. He stated that the government would continue to promote economic diversification, regional cooperation and the development of gaming and non-gaming elements.

The acknowledgement by the Macau government that the ongoing slump in GGR could lead to the introduction of austerity measures is a “wake-up call” for the city’s officials, analyst David Bain from Sterne Agee CRT wrote in a note released on Monday.

He added: “In essence, discussions could act as a ‘wake-up call’ for policy makers of key gaming topics, including stronger smoking restrictions and table allocations for new property openings.”

Some Macau casinos visited by GGRAsia on Thursday, actually had tables that were closed, notwithstanding strong consumer demand during Chinese New Year (CNY). The reasons for some tables being... END_OF_DOCUMENT_TOKEN_TO_BE_REPLACED