May 19, 2015 Newsdesk Features, Latest News, Philippines, Top of the deck 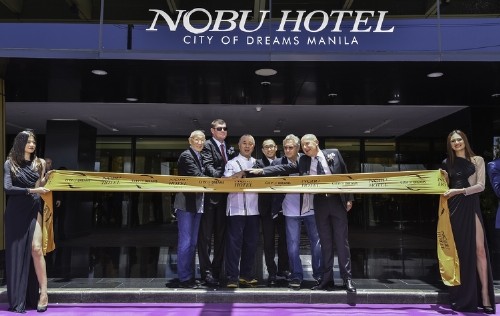 The latest business link between casino operator and developer Melco Crown Entertainment Ltd and Hollywood celebrity branding was cemented on Monday with the opening of Asia’s first Nobu Hotel.

The 321-room property is at City of Dreams Manila, a casino resort in the Philippines capital. The casino venue is operated by a unit of Melco Crown and opened on December 14.

The Nobu name is best known for 36 restaurants in 31 cities across five continents. They have an unlikely Peruvian-Japanese fusion menu brought about when in the 1970s a young Mr Matsuhisa was plucked as a novice chef in a high class Tokyo sushi restaurant to help open a Japanese restaurant in the Peruvian capital Lima.

Today the brand – popularised by celebrity backers and patrons – has eight hotels, including Nobu Hotel at Caesars Palace in Las Vegas, which opened in 2013, and now City of Dreams Manila.

Conspicuous consumption by the wealthy has recently become unfashionable in China and its gambling playground Macau because of a government crackdown on corruption. The innocent are keeping a low profile for fear of being lumped with the guilty, said Sheldon Adelson, chairman of Las Vegas Sands Corp and its Macau unit Sands China Ltd during a question and answer session at Global Gaming Expo in Las Vegas in October.

But Macau’s loss might be a gain for Manila and other regional casino destinations. A week ago investment analysts at UBS AG stated in a note that Suncity Group Ltd – said by analysts at Daiwa Securities Group Inc to be the largest investor in Macau VIP gambling measured by the rolling chip volume of its players – was starting junket operations at City of Dreams Manila.

The Nobu Hotel at City of Dreams Manila appears to be aimed at a clientele that is rich and doesn’t mind showing it. The hotel is said – according to a press release on Monday – to include an “in-room menu featuring Nobu-inspired menu items”.

“We are convinced that the development of highly exclusive, luxury lifestyle offerings is a key driver in inspiring growing numbers of the region’s luxury-leisure destination seekers to visit Manila and the Philippines,” said Clarence Chung Yuk Man, chairman of Melco Crown (Philippines) Resorts Corp, the local unit running City of Dreams Manila, as quoted in the same public relations hand out.

Monday’s statement didn’t detail the business arrangement between Nobu Hospitality and Melco Crown for the use of the Nobu brand.

In June last year it was announced that Hyatt Hotels & Resorts and Melco Crown Philippines had confirmed an hotel management agreement for Hyatt City of Dreams Manila. The property also has a Crown Towers hotel.

The casino industry in the U.S. has long been linked to Hollywood as a setting for films and television series.

The connection between Hollywood and the Asian casino industry is a more recent phenomenon. But the Nobu brand and its celebrity backers are not Melco Crown’s only link with Hollywood and show business.

In January it was announced that Mr De Niro and his fellow thespians Leonardo DiCaprio and Brad Pitt are the stars of a short promotional film called ‘The Audition’ directed by Martin Scorsese. It is due to have its global premiere at the launch of Melco Crown’s majority owned Studio City casino resort on Cotai in Macau. The US$3.2-billion property is currently due to launch in the third quarter of the year. A short film featuring the same ensemble has also been used to promote City of Dreams Manila.

Melco Crown confirmed in an email to GGRAsia in September that RatPac Entertainment was producing the promotional material. It is an American motion picture financing company formed in 2013 by filmmaker Brett Ratner, Dune Capital Management LP’s Steven Mnuchin and Melco Crown’s Mr Packer, who is also chairman of the Australian casino operator Crown Resorts Ltd.

SOFTSWISS Jackpot Aggregator is cooperating with Curaçao-licensed Spinago to launch the latter’s worldwide jackpot campaign for the online gaming sector. The information was given by SOFTSWISS, a... END_OF_DOCUMENT_TOKEN_TO_BE_REPLACED