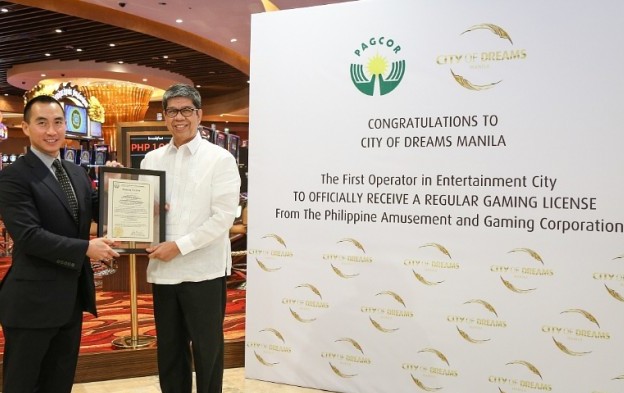 Under the terms of a deal with the country’s casino regulator, the Philippines Amusement and Gaming Corp, also known as Pagcor, the property initially opened on a provisional licence.

The regular licence, issued on Monday by Pagcor in a formal presentation (pictured), is valid until July 11, 2033, Melco Crown Phillipines said in a Tuesday filing to the Manila Stock Exchange. The full licence was issued after City of Dreams Manila had, according to Melco Crown Philippines, met a minimum US$1 billion investment threshold.

City of Dreams Manila had a soft opening on December 14, followed by an official inauguration on February 2. It applied for the issuance of a regular casino gaming licence on January 30, the filing stated.

City of Dreams Manila, described in media reports as a US$1.3-billion project, is a partnership with Philippine-based Premium Leisure and Amusement Inc, a unit of Premium Leisure Corp, controlled by the family of Philippine billionaire Henry Sy.

The property is the second of four integrated resorts planned for Entertainment City in Manila, an area earmarked by Philippine authorities to become a casino district, and meant to emulate the success of Macau’s Cotai district.

Melco Crown Philippines is a subsidiary of Hong Kong-listed Melco Crown Entertainment Ltd. The latter is scheduled to release its first quarter results on Thursday. They are expected to include details on the performance of City of Dreams Manila during the January to March period, the first full quarter of operations of the property.

“We are proud and honoured to receive the regular gaming licence as it is a tremendous show of confidence by the government in Melco Crown and our local partners,” Lawrence Ho Yau Lung (pictured, left), co-chairman and chief executive of Melco Crown, said in a statement.

Starting from 1am on Tuesday (August 9), most travelling directly by air or sea to Macau from mainland China are required to take a nucleic acid test (NAT) upon arrival, plus another such test within... END_OF_DOCUMENT_TOKEN_TO_BE_REPLACED