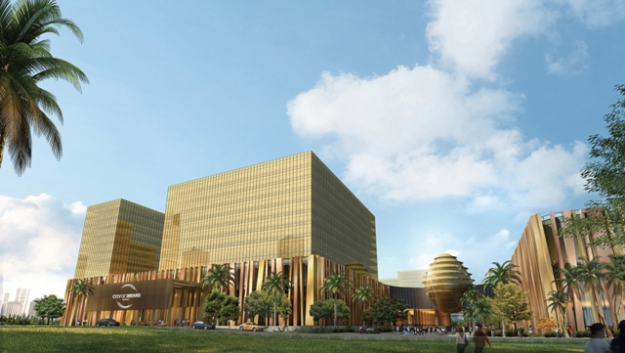 The property’s grand opening is planned for “the first quarter of 2015,” Mr Ho said in comments accompanying the firm’s third quarter results on Thursday.

“Pretty much everything will be open” by December, the executive said on a conference call with analysts. “It’s the first time we are in that market, it’s a new jurisdiction … this is the safest approach,” he added.

Net revenue for the three months to September 30 fell by approximately 10 percent year-on-year to US$1.1 billion, the company said in Thursday’s filing.

The lower rolling chip volume also hammered Melco Crown’s adjusted property earnings before interest, taxation, depreciation and amortisation (EBITDA) in the third quarter. Adjusted property EBITDA was US$305.7 million, down about 10 percent from a year earlier.

“Softer margins at City of Dreams were offset by better margins at Altira,” said a note from Cameron McKnight of Wells Fargo Securities LLC. “Adjusted net EBITDA of US$277 million was 2 percent above our estimate but 5 percent below our consensus,” Mr McKnight added.

Junket operator Suncity Group started operations in Altira in mid-September, chief operating officer Ted Chan confirmed on the conference call. “I think it [Suncity operations] is still starting to ramp up, but we see some potential,” he added.

Melco Crown reported annual increases in net revenue for all non-gaming businesses in the third quarter, including rooms, food and beverage, entertainment and retail. Casino revenue however dropped 10.6 percent year-on-year to US$1.1 billion, the firm said. Operating income for the period was US$147.7 million, down 28.8 percent from US$207.5 million a year earlier.

The firm announced a quarterly dividend of US$0.024 per share, to be paid on December 4 to shareholders registered by November 24.

Studio City, the company’s second large-scale resort in Cotai, remains on track to open in mid-2015, Mr Ho said. But he sounded a note of caution regarding table allocation for the project.

“In terms of number of tables, the truth is that honestly we don’t know because the government is in a kind of in transition. There will be a new government sworn in in December under the same Chief Executive, but a lot of the ministers will probably be different,” Mr Ho said.

The executive had previously mentioned the firm hoped to get “400 gaming tables or more” for Studio City.

On Thursday, Mr Ho said: “At this stage, they [government] have not communicated to us what the table allocations are. Our requested allocation seems very reasonable, but to be honest we are concerned.”

Melco Crown has a 60 percent equity stake in Studio City. The resort has been topped out and the firm will start mass recruiting “five to six months before opening,” Mr Ho added.

On the conference call, Melco Crown executives said they have seen some negative impact on gambling activity because of the smoking ban imposed on mass gaming floors market-wide on October 6, but added the impact was hard to quantify.

The company confirmed it has converted most of its premium mass areas to VIP in the second half of October, a move that has put the operator and the Macau government at odds.

“We have always been utmost respectful of the rules and laws of Macau,” Mr Ho said. “We believe we are in complete and total compliance with the law as specify by the government with regards to smoking regulations,” he added.

SOFTSWISS Jackpot Aggregator is cooperating with Curaçao-licensed Spinago to launch the latter’s worldwide jackpot campaign for the online gaming sector. The information was given by SOFTSWISS, a... END_OF_DOCUMENT_TOKEN_TO_BE_REPLACED