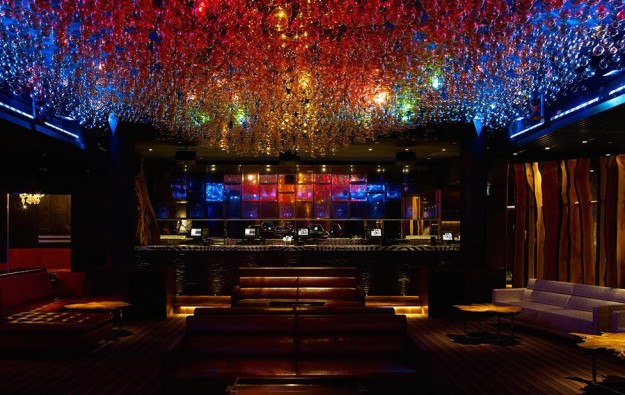 “Renowned for pioneering the ‘Ultra-Lounge’ concept in the 1990s, Pangaea has become a staple for those familiar with its intimate and sophisticated club set,” Melco Crown Philippines stated in a press release.

“Chaos is credited for being the world’s first ‘bottle service’ night club,” added the firm.

Melco Crown Philippines said Pangea would be able to host up to 400 guests a night in more than 730 square metres (7,858 square feet) of space, including VIP areas. The brand also has an outlet (pictured) at Singapore casino resort Marina Bay Sands. Pangea Singapore is reportedly the highest earning club in the world per square foot.

The Chaos nightclub will feature a dance club and private karaoke rooms. It will be spread across two levels covering approximately  3,000 square metres (32,392 square feet) and will have capacity for more than 2,000 customers.

Both clubs will be situated in City of Dreams Manila’s Fortune Egg, described by Melco Crown Philippines as “an architecturally-unique dome-like structure, which will be accented with creative exterior lighting design”.

The company had previously stated the property would also have an approximately 260-room Crown Towers hotel, using the branding of Crown Resorts Ltd, one of two controlling shareholders of parent Melco Crown.

City of Dreams Manila will also have a Nobu Hotel – the first in Asia – taking advantage of the brand recognition globally of Japanese chef Nobu Matsuhisa and Nobu’s brand ambassador, Oscar-winning actor Robert De Niro, who is also a shareholder in Nobu Hospitality LLC.

On the entertainment front, the company in May entered into a licensing agreement with popular American animation studio DreamWorks Animation SKG Inc for City of Dreams Manila. The casino resort will host animated characters including Kung Fu Panda Po, Shrek and King Julien of Madagascar, under an education-based, interactive entertainment concept called ‘DreamPlay by DreamWorks’.

With the partnership, The Ault Group enters the Philippine market for the first time, expanding its nightclub operations in Asia, which include presences in India as well as Singapore.

“The Philippines is a highly important market with extraordinary growth potential,” Mr Ault was quoted as saying. “It has a huge young and educated demography, many of whom have travelled the world and seek the very best in nightlife entertainment.”

It is likely that Macau will shortly have a third round of citywide centre-based Covid-19 testing in little more than a week, after the results so far of a second mass test – that was due to finish... END_OF_DOCUMENT_TOKEN_TO_BE_REPLACED