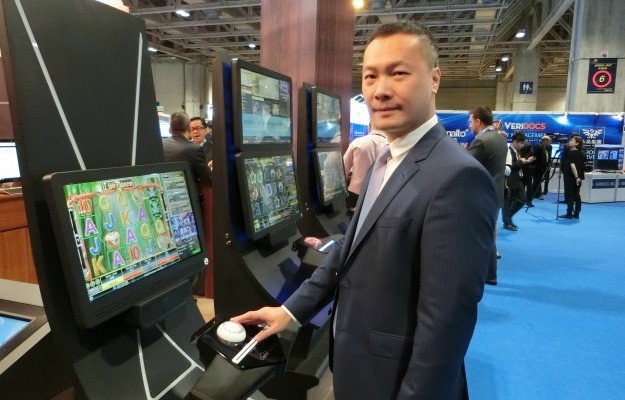 The product GameSource – launched via Macau-based Pacific Intellectuals Alliance Macau Ltd – is to help the firm to capture via supply of its game content “at least five to eight percent” of the slot machine market in the city in 2019, the firm’s director Lam Iao told GGRAsia.

GameSource consists of a cloud-based platform offering land-based casinos access to a library of electronic games. Currently, there are four gaming content developers – RTG Asia, August Gaming, EPICONE and Laxino Systems Ltd – that have signed up with the firm to provide their games to the platform, Mr Iao told us on the sidelines of the trade show Global Gaming Expo (G2E) Asia 2018. Laxino Systems, a provider of online gaming technology and games, is referred to by Mr Iao as now a partner firm to Pacific Intellectuals Alliance.

“This year, we’ll be rolling out [GameSource] at MGM [Macau]. We target we would sign up with another [casino] operator by the end of this year. And next year, we will have plans to cover at least 5 percent to 8 percent of the slot machines [terminals] market in Macau. We are quite confident about that,” Mr Iao said.

“We’d like to break the ice. We’d like to show the world what Macau [firm] is capable of doing. We manufactured this platform from scratch,” he noted, adding that GameSource product has been three years in the making. His firm has also applied for product patents in 10 jurisdictions, including in Australia, the state of Nevada in the U.S., and Singapore.

“We target to not only roll out [GameSource] in Macau, but use Macau to make a successful story to prepare us to go beyond here and penetrate into other markets of the world,” Mr Iao said.

“Now with our new platform, all you see here in the cabinet is nothing but a PC-based kiosk, for which the compliance is minimum because there is no [coin] hopper, no bill acceptor. So it is really different from traditional slot machines in terms of maintenance, in terms of flexibility of changing the games and changing the products mix on the run,” he remarked.

Speaking of the earnings the online gaming content providers Laxino Systems achieved last year, Mr Iao said it had been “flat”. He added that the market of such type of business has been “saturated”.

“Just as the Macau junkets, the true [game] developers that can stay are those that have the ability to sustain and carry forward with their business roadmap; are the ones who can really stick to the market with their brand and with what they do,” Mr Iao told.

“For us, unfortunately, our gaming revenue is not as what we have projected. But we are on the right track because we switch the focus from being a game developer to become a platform provider,” he added.

South Korea on Thursday said it would from June 1 resume issuing short-term tourism visas for trips to the country’s mainland, for individual visitors and groups of tourists. Permits for... END_OF_DOCUMENT_TOKEN_TO_BE_REPLACED