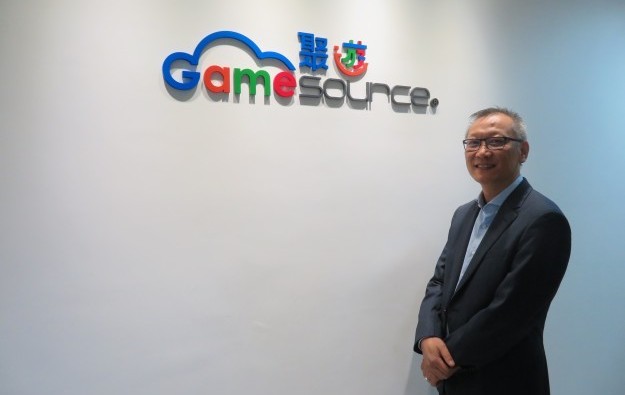 Macau-based International Alliance Systems Ltd says its data-cloud-based electronic game platform GameSource is “ready” for its debut in Macau, via the main gaming floor of MGM Macau, a property promoted by MGM China Holdings Ltd. The launch will be via eight fixed terminals and four hand-held computer tablets made available to players at the casino property, according to International Alliance Systems’ chief executive officer Anthony Ip (pictured).

“We’re ready to go on the floor. In the coming weeks it will be ready for play-for-cash [at MGM Macau],” Mr Ip told GGRAsia in an interview.

GameSource consists of a platform giving land-based casinos access – via a data cloud – to a library of electronic games; some of them slot games. The platform runs on generic devices with touchscreen capability. This means no specific hardware is needed to play the games carried on the digital platform.

Casino operators select which games – from among the approximately 80 available in the GameSource library – they want to make available to their customers. Mr Ip noted to us that there were seven games available at the terminals and devices being deployed at MGM Macau, including some “Chinese-themed slot games”.

Independent, third-party, content developers have the possibility of making their games available via the GameSource library without themselves needing to deal with compliance matters, the International Alliance Systems executive noted. “GameSource will be in charge of the compliance aspect, all the reporting, all the metering… they [game developers] no longer need to put so much effort,” into those things. That can save “lots of energy” and “time” which can instead be focused on game content creation, Mr Ip said.

The platform’s launch via MGM Macau follows a “play-for-points” trial at the property that began in October 2018, Mr Ip noted. He added that his company was currently “working” with the other Macau-based operators and some Southeast Asian ones, in order to launch GameSource products.

“[At MGM Macau] You will see 12 terminals: eight of them are fixed terminals and the other four are Wi-Fi [-connected] tablets. We are not using the patrons’ equipment [hand-held devices]. We’ll have dedicated equipment placed [at a designated area on] the floor. So that equipment has our security measures, and are controlled,” Mr Ip told us.

“Honestly it is not something new and it is already part of our life,” Mr Ip added, referring to cloud-based technology.

“But I can proudly say this is the first time we are achieving that level of security and… compliance… that can be accepted on the floor. It’s not just about the tablet or the mobile itself – it is the technology that underlines it: how you enable it, and how you protect it to ensure the whole operation, the integrity, the technology framework… Those are the things I would say,” focus “people’s attention in the industry,” Mr Ip remarked.

While the GameSource platform developer would like to provide a “light” – i.e., easy to handle – experience for players via the hand-held devices, the concept had – as anticipated – been the subject of a “challenging” regulatory process in Macau, Mr Ip remarked. Macau’s casino regulator Gaming Inspection and Coordination Bureau – known also by its Portuguese-language acronym DICJ – is the entity in charge of approving the games to be made available on the city’s gaming floors.

DICJ’s questions were “mostly on the integrity level and security level, and I think that’s fair,” Mr Ip told us.

The GameSource developer also noted to us some of the casino operators’ concerns and questions when the product was explained to them.

Queries included whether “the security level” for running of GameSource games via a hand-held device was “acceptable”. Operators also wanted to know “is it stable?” Mr Ip outlined.  They also wanted to know about “the physical security: will people take it [the hardware] away?” the CEO noted.

He added the firm had worked “closely” with the industry to address all such questions.

“We have strong technology… besides we have third-party examinations – BMM Testlabs – and also we have auditors to qualify it,” said the CEO, referring to gaming testing laboratory and technical consultancy BMM International LLC, known as BMM Testlabs.

“I would say DICJ on one side gave us lots of tough questions or challenges; but on the other hand they also helped us to perfect our product,”… making it a “learning process for both sides,” Mr Ip remarked.

The successful launch of GameSource platform in Macau could prove to be an important push to the developer’s plan to expand its footprint to the United States, Mr Ip said.

To date, Mr Ip’s firm has invested “over US$50 million” in development and compliance-related costs on the GameSource platform. “Every year we continue to put in” resources regarding GameSource, and there will “more and more in research and development, just like any other tech company,” the CEO stated.

Some Macau casinos visited by GGRAsia on Thursday, actually had tables that were closed, notwithstanding strong consumer demand during Chinese New Year (CNY). The reasons for some tables being... END_OF_DOCUMENT_TOKEN_TO_BE_REPLACED