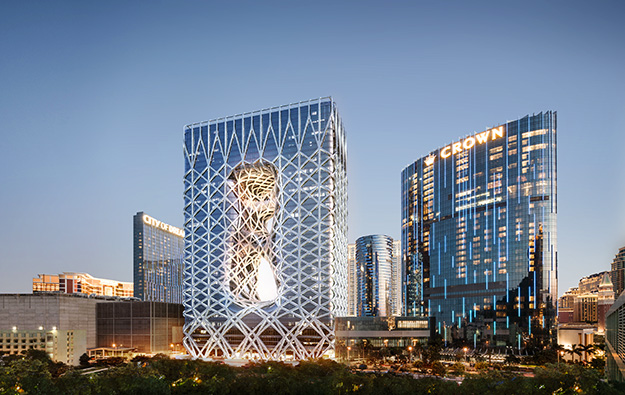 The long-anticipated fifth hotel tower at the City of Dreams casino resort in Macau will have gaming, said the chairman of its promoter, Melco Crown Entertainment Ltd, in a media briefing on Tuesday that also revealed the hotel branding and gave an update on the tower’s construction.

Lawrence Ho Yau Lung, chairman and chief executive of Melco Crown, said his firm would be moving gaming tables from its existing operations in Macau to one floor of the new facility (pictured centre, in an artist’s rendering).

He added the hotel in the new tower would be branded “Morpheus”, and mentioned he was interested in expanding the brand globally. A press release from the firm outlined that the name was inspired by the “god of dreams”, understood to be a reference to the deity of the same name in Greek mythology. The company anticipates construction of the tower would be completed in the first quarter of 2018, and said it would cost US$1 billion.

Mr Ho stated his firm is yet to decide the market positioning of gaming in the fifth tower.

“There’s one floor of Morpheus, and I think it’s going to be a few VIP [gaming] tables or a few premium mass tables,” Mr Ho said.

The Melco Crown chief executive did not specify an opening date for the new hotel tower. A press statement from the firm, issued at the briefing, indicated the new hotel is “expected to commence operation in 2018”.

“Morpheus is really a hotel tower and the one floor of gaming is just [involving] the moving of some of the mass tables or whatever, to that area. So it is not a separate casino,” said Mr Ho when asked about the plan for the gaming elements at Morpheus.

“And in terms of VIP business, I think Melco Crown has always been not very reliant on VIP – less than 5 percent of our EBITDA [earnings before interest, taxation, depreciation and amortisation] comes from VIP,” he added.

“As a company, we are focused on growing premium mass, and that’s always been the case. I think we are, in the whole of Macau, the second-least reliant on VIP… I’m happy that it [Macau's VIP business] has recovered, but I think the driver for Macau and for Melco Crown for the years to come will be based on mass,” the Melco Crown boss remarked.

The Morpheus tower stands 160 metres (525 feet) high, and will feature approximately 780 guest rooms along with suites, “sky villas” and duplex villas, said Melco Crown. A novel feature of the new hotel will be high-speed observation lifts up and down the atrium, offering views to the interior architecture.

“The cooperation with Zaha Hadid… was an honour for us: unfortunately she passed away. But this [the tower] is one of her last works. So for us, in future, it is important for us to grow this hotel brand globally,” Mr Ho said. “Our investment for this hotel tower is US$1 billion, positioned for sophisticated international travellers,” he added.

The extended period between the original announcement of plans for a fifth tower at City of Dreams and the realisation of the project was mainly due to its “challenging” and “complex” architecture style, Mr Ho remarked. But he said he was confident that come the hotel tower project’s completion, there will still be demand for more, high-quality, hotel rooms in Macau.

“In future, there will still be [fresh] demand for hotel rooms here,” said Mr Ho when asked if he is concerned about the possibility of oversupply of luxury accommodation in the city.

“Now, even after two new casino hotels [Wynn Palace and Parisian Macao] have opened, which brought additionally nearly 5,000 hotel rooms [to the market], our properties City of Dreams, Studio City and Altira still see an occupancy rate of over 95 percent,” said the Melco Crown boss.

“We [as a market] don’t have that much growth [in visitor arrivals] now because of a bottleneck in infrastructure. So in future, when the infrastructure improves – especially when the Hong Kong-Zhuhai-Macau Bridge is opened, Macau can see a greater flow of visitors brought in by the Hong Kong International Airport. This I think will be positive for our company and for the city’s economy,” added Mr Ho.

The Melco Crown executive additionally remarked that Studio City, on the western side of the Cotai Strip, had seen better visitor traffic after the neighbouring Parisian Macao – a US$2.7-billion casino resort promoted by Sands China Ltd – opened on September 13.

“After the Parisian Macao opened, we have seen bigger traffic [to Studio City]. The flow of visitors has got better because the blockage on the road was removed,” Mr Ho remarked, referring to associated construction work.

He added, referring to a light rail system serving Taipa and Cotai, that is due to open in 2019: “In the long term, we think that Studio City will improve because we like its location being near the Lotus Bridge and the border [with the mainland], which will also see a connection to a light rapid transit station.”

Most of Macau’s casino operators are likely to generate positive free cash flow in the first quarter, given the robust recovery level of mass-market gross gaming revenue (GGR) in January, relative... END_OF_DOCUMENT_TOKEN_TO_BE_REPLACED