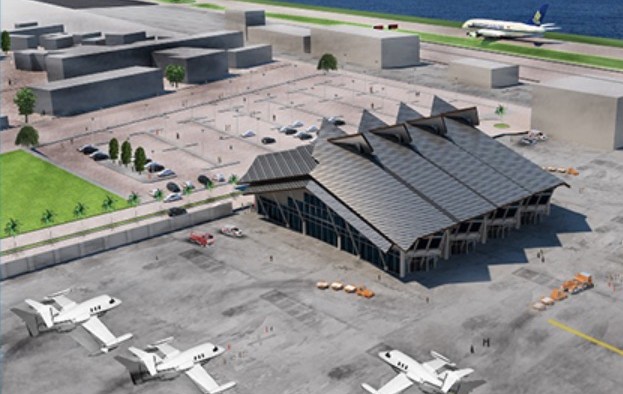 Belle Corp, an investor in the City of Dreams Manila casino project in the Philippines, has confirmed to the country’s stock exchange that it has agreed to join a consortium proposing a huge reclamation and infrastructure project on the southwest outskirts of Metro Manila. According to the scheme’s website, it would include a new international airport serving the capital.

The Philippine Star newspaper had reported on Sunday that the scheme – known as the Philippine Global Gateway Project (pictured in a rendering), at Sangley Point, Cavite – would involve a new seaport as well. It described the total venture as a US$50-billion scheme.

Sangley Point is next to the Manila-Cavite Expressway, a major toll road that extends northwest and currently ends close to Entertainment City, where City of Dreams Manila is located.

In a filing on Wednesday to the Philippine Stock Exchange, Belle confirmed that on October 29 it had signed an agreement with what it referred to as the Solar Group, for participation in a consortium called All-Asia Resources and Reclamation Corp (ARRC).

Belle said in the filing that the reclamation scheme including “its components, timing and investors,” were being “worked out by ARRC directly, and we understand that ARRC will be making the disclosures on these at the appropriate times”.

Belle added in its regulatory announcement it was interested in taking an equity stake of up to 49 percent in ARRC, but did not confirm the total value of the project.

The Philippine Star had quoted Willy Ocier, Belle vice-chairman and executive director, referring to an airport for the scheme.

“This project is very timely considering the air and land traffic congestion we are experiencing every day,” Mr Ocier was quoted saying by the news outlet.

Belle is controlled by Henry Sy, one of the Philippines’ richest entrepreneurs.

The report also quoted ARRC president Wilson Tieng as saying the new airport would have capacity for 50 million passenger movements, and would be able to accommodate projected passenger traffic levels well into the middle of the current century.

Were there to be a new airport at Sangley Point, it would potentially compete with a US$10-billion international airport project – also mooted for land close to the Manila-Cavite Expressway – that had been outlined in 2014 by Ramon Ang, president and chief operating officer of San Miguel Corp.

ARRC’s Mr Tieng was quoted on Sunday as saying the nation’s leader, President Rodrigo Duterte, had “verbally approved” its own infrastructure project in August, during the fifth cabinet meeting of his administration.

In June 2015, Enrique Razon, a member of another of the country’s leading business clans and the chairman and chief executive of Bloomberry Resorts Corp, which developed another of Entertainment City’s gaming venues – Solaire Resort and Casino – said he would be willing to invest in some form of new international airport in Manila to boost tourism in the country. He suggested a new gateway would also bolster the number of tourists that visit Entertainment City.

Manila Ninoy Aquino International Airport is currently the main air hub for the Philippine capital. Next door to the existing main airport is the Resorts World Manila casino resort.

Resorts World Manila is not part of Entertainment City and was the first of the new large-scale private sector casino venues to open in Manila. It was developed by Travellers International Hotel Group Inc, a venture between local conglomerate Alliance Global Group Inc and Genting Hong Kong Ltd. The property has been undergoing expansion.

Entertainment City, an initiative of the country’s casino regulator, the Philippine Amusement and Gaming Corp (Pagcor), has targeted foreign tourists as potential customers.

It is likely that Macau will shortly have a third round of citywide centre-based Covid-19 testing in little more than a week, after the results so far of a second mass test – that was due to finish... END_OF_DOCUMENT_TOKEN_TO_BE_REPLACED