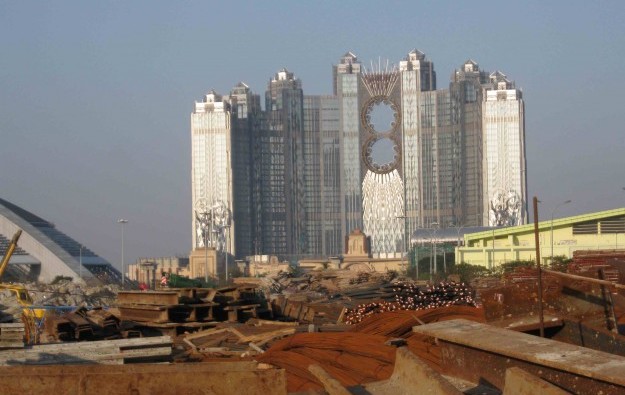 Studio City, majority-owned by Melco Crown Entertainment Ltd, started operations in Macau’s Cotai district on October 27. It is next door to the under-construction Sands China property Parisian Macao, which is due to open in the third quarter of 2016.

The Studio City site is also next to a section of the under-construction Macau light rail transit system. The Taipa portion of the system – including a loop serving Cotai – is likely to be operational only by 2019, according to the latest government estimates.

He added: “While we continue to believe Studio City is the best located casino resort in Macau longer-term [neighbouring the Lotus Bridge connecting Cotai with mainland China], ongoing construction on both sides of the property combined with a relatively flattish (+2 percent quarter-on-quarter) sequential revenue environment likely stalls a significant near-term property ramp.”

Market wide in Macau, casino gross gaming revenue stood at MOP56.2 billion (US$7.0 billion) in the first quarter of 2016, compared to MOP54.8 billion in the previous three months.

In the note, Sterne Agee CRT significantly reduced its estimates for Studio City’s first quarter 2016 property EBITDA (earnings before interest, taxation, depreciation and amortisation) to US$22.6 million from US$40.2 million.

Studio City became the first major casino resort in Macau to open without any junket tables for VIP play. For the period between October 27 and December 31, 2015, net revenue at the property was US$123.2 million, with adjusted EBITDA of US$12.6 million.

The Macau authorities announced on Friday some of the key aspects of a bill proposing a new regulatory system for gaming that will shape how the industry looks for years ahead. Macau’s Executive... END_OF_DOCUMENT_TOKEN_TO_BE_REPLACED