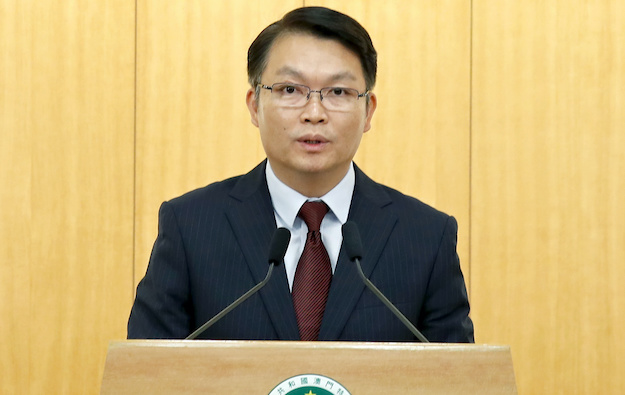 Macau casino gross gaming revenue (GGR) declined by “around 10 to 11 percent” in year-on-year terms in the first 30 days of January, the month that included the Chinese New Year holiday, said on Friday a senior Macau government official.

Such GGR was MOP21.37 billion (US$2.66 billion), stated the city’s Secretary for Economy and Finance, Lei Wai Nong (pictured in a file photo), in comments during a government press conference on Friday.

The decline coincided with the city’s government announcing on January 22 – just before the holiday – that Macau had recorded its first imported case of viral pneumonia in a visitor hailing from Wuhan, a city in the mainland’s Hubei province identified as the epicentre of a newly-identified coronavirus.

During Friday’s press conference, Secretary Lei declined to offer a forecast on the impact of the coronavirus outbreak on Macau’s casino industry. “The priority is to control the outbreak. If we can do so, I am sure that Macau as whole can recover more rapidly than other cities,” he said.

The official added that, despite the ongoing decrease in business, the government had been assured by the city’s six casino operators that, up to the moment, there was no pressure to force gaming employees to go on unpaid leave.

A Wednesday note from Nomura’s Instinet LLC quoted casino executives in Macau as saying that gaming floors in the city were “very quiet”. The note added that operating expenses at the city’s casinos “now exceed gaming revenues”, due to a slump in player numbers.

Mr Lei said, in response to reporters’ questions, that the government still had no plans to request a closure of the city’s casinos. But he added that the control effort could not exclude such a possibility.

The official said the decision to order a closure of Macau’s casinos would be based on a risk assessment from Macau’s Health Bureau. He added that the measures currently in place at gaming floors were considered effective to prevent the spread of the coronavirus.

“According to our risk assessment and the measures in place inside casinos, it is still safe” for staff and patrons, to keep gaming operations running, said Mr Lei.

As of last week, Macau casino workers have been instructed by the local gaming regulator to wear protective facial masks while on duty. The Macau government has also issued an executive order banning from Macau casino premises anyone who has been to Hubei province within 14 days of their arrival in Macau.

Macau’s six casino operators also have been screening the body heat of their respective staff and customers as they enter gaming floors.

As of Friday, the confirmed cases in Macau of infection by the newly-identified coronavirus – all involving visitors from Hubei and thus “imported” – stood at seven. Also as of Friday, China’s National Health Commission had said there were 9,096 confirmed cases within the country as a whole, and that national death toll stood at 213. There were no fatalities recorded in Macau as of that date.

China’s State Council had designated this year’s holiday as running from Friday, January 24 – the eve of Chinese New Year – until Thursday, January 30 inclusive.

A senior executive from Las Vegas Sands Corp, parent of Macau casino operator Sands China Ltd, had said on the group’s fourth-quarter earnings call that the first 21 days of January had provided a strong start to the month, only for trading in the rest of the month to be poleaxed by the health emergency.

Gaming revenue at Paradise Co Ltd, an operator in South Korea of foreigner-only casinos, rose by 312.9 percent year-on-year, to KRW39.17 billion (US$27.6 million). But such revenue was down 22.4... END_OF_DOCUMENT_TOKEN_TO_BE_REPLACED