Cotai LRT plus for Melco, Wynn, MGM and Galaxy: Nomura 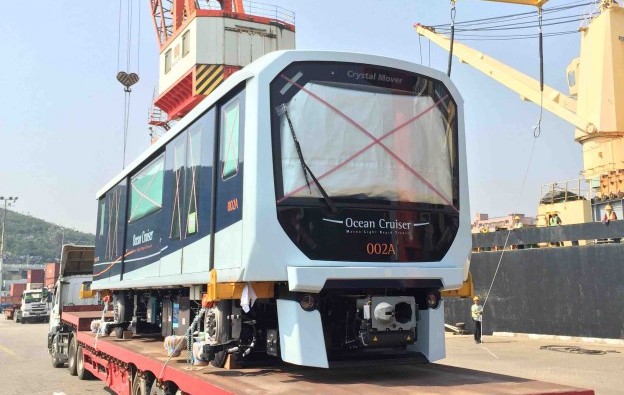 Five major Cotai casino properties are likely to be the main beneficiaries when the Taipa-Cotai section of Macau’s light rail transit (LRT) system (pictured in a file photo) opens, because of their proximity to stations on the route, says a memo from Japanese brokerage Nomura.

“In particular, the Cotai East station will have a short walking-bridge that connects directly into MGM Cotai, Wynn Palace and City of Dreams,” wrote analysts Harry Curtis, Daniel Adam and Brian Dobson.

The implication of the Nomura note is that access via the LRT to other Cotai venues – Sands China Ltd’s Venetian Macao, Parisian Macao and Sands Cotai Central; and to SJM Holdings Ltd’s under-construction Grand Lisboa Palace – will not be as convenient.

The Macau government said on January 8 that the under-construction Taipa-Cotai section of the LRT system had been undergoing operational testing.

While the Taipa-Cotai section does not link Macau peninsula to the Cotai casino district, the new line will connect the gaming resorts there to several important entry points to Macau for tourists. They are: the Pac On ferry terminal, and the Macau International Airport, both on Taipa; and the Lotus Bridge checkpoint that links mainland China’s Hengqin Island to Cotai.

The Nomura team stated in its Thursday note: “In our view, major infrastructure improvements, such as the Taipa-Cotai LRT line opening in the second half of 2019 and recent openings of the Hong Kong-Zhuhai-Macau Bridge (October 2018) and Pac On ferry terminal (May 2017) are key catalysts for significant visitation and GGR growth in Macau.”

The analysts said such infrastructure improvement contributed to their optimism regarding Macau’s gaming sector, particularly for the second half of this year.

Macau received a total of nearly 3.27 million visitors in November, representing an increase by 15.3 percent year-on-year, according to the latest available data from the city’s Statistics and Census Service. Of that tally, a total of 2.28 million were from mainland China. The contribution of this segment rose by 15 percent. A further 591,077 visitor arrivals were Hong Kong-based people, representing a 25.6-percent increase.

But when analysed by mode of transport in November, the number of visitors arriving by boat at either the Outer Harbour Ferry Terminal or the Pac On ferry terminal declined respectively by over 30 percent year-on-year. The traffic decline by ferry transport – the common mode for people from Hong Kong to travel to Macau – could be attributed to “customer trial” following the opening of Hong Kong-Zhuhai-Macau Bridge on October 24, Nomura remarked.

In November, a total of 271,171 visitors arrived in Macau via Macau International Airport and 264,096 visitors came via the Pac On Taipa ferry terminal. The two entry points accounted in aggregate for for 16.4 percent of the November visitor tally.

Referring to the ease of use regarding the super bridge spanning the Pearl River Delta, the Nomura team stated: “Recent commentary about the time savings has not been positive… which probably means that customers are likely to gravitate back to using the ferries.”

Nomura added: “The light rail should also reduce customer travel time to the Cotai casinos, particularly the ones where the stations are located adjacent to the operators entrances (again, MGM, Wynn and Melco).”