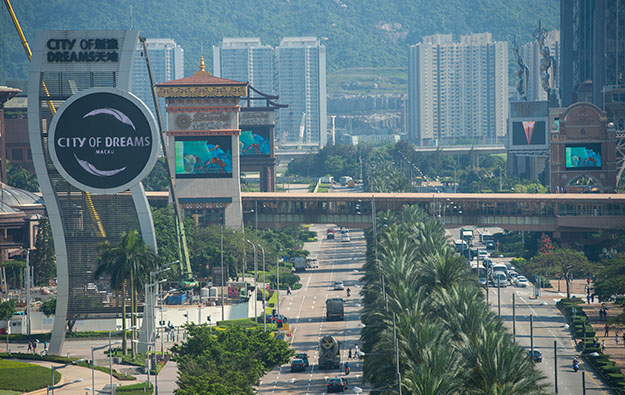 The Cotai district’s share of total Macau casino gross gaming revenue (GGR) has risen from 45.5 percent in the first quarter 2014, to 61.4 percent at the end of the fourth quarter 2017.

The 15.9 percentage point improvement in Cotai’s share of Macau market GGR coincided with an 11.3-point increase in the percentage of all Macau four- and five-star hotel rooms contributed by the Cotai during that time frame. Cotai’s share of the Macau luxury hotel room segment rose from 47.0 percent, to 58.3 percent. In actual terms, it represented an increase from 12,800 rooms to 21,200 rooms.

These data are according to an investor presentation from casino developer Melco Resorts and Entertainment Ltd, citing information from its own filings, those of the other five Macau casino operators, and data from the local casino regulator, the Gaming Inspection and Coordination Bureau.

Melco Resorts has most of its gaming assets in Cotai, a landfill area with a strip of large-scale casino resorts offering shopping and entertainment, as well as mass-market gaming and high-stakes, high-roller play.

The Melco Resorts investor briefing, lodged on Friday on the firm’s website, also indicated that Cotai’s share of Macau mass-market GGR had risen from 51.3 percent in the first quarter 2014, to 64.2 percent by December 31 last year.

Market wide, mass play including slots accounted for 43.3 percent of all GGR from games of fortune in full-year 2017 according to the gaming bureau.

Melco Resorts’ first Cotai venue, City of Dreams Macau, had a first-phase opening in June 2009. City of Dreams is aiming to open a fifth hotel tower – Morpheus, which will have space for premium mass gambling tables according to previous company announcements – before the end of the second quarter this year.

Studio City, a Cotai venue 60 percent owned by Melco Resorts, opened in October 2015 without any VIP gambling. After what investment analysts said was a slow ramp up of its gaming business, the venue was allowed by the Macau government to add high roller play in November of the following year.

Fitch Ratings Inc acknowledged in a Thursday note that Japanese leisure conglomerate Universal Entertainment Corp, the ultimate parent of the Okada Manila casino resort in the Philippines, was a... END_OF_DOCUMENT_TOKEN_TO_BE_REPLACED