Mass casino gross gaming revenue (GGR) generated by Macau’s Cotai casino resorts is likely in the fourth quarter of 2015 to have declined at a much slower rate year-on-year than mass revenue produced in the city’s traditional downtown gaming hub, said a report on Monday from Japanese brokerage Nomura.

“New casino openings and the relative resilience of the mass gaming segment continue to drive the shift in market share from Macau peninsula to Cotai. In fourth quarter we forecast Cotai’s mass gaming revenue will [have shown] decline by 1 percent, outperforming a likely decline of 13 percent for Macau peninsula,” said analysts Richard Huang and Stella Xing.

The breakdown between mass revenue on Cotai and mass revenue on the peninsula should become clearer when Macau’s six gaming licence holders report the details of their fourth quarter and full-year results from this week onward. Wynn Resorts Ltd, parent of Wynn Macau Ltd –  and which does not yet have a Cotai resort open – gave the market on January 18 a preview of its final-quarter and full-year numbers.

Nomura’s team noted on Monday that the outperformance of Cotai in mass business, compared to the downtown area, was likely to push the whole of Cotai’s market-wide share of mass GGR to 54 percent in the fourth quarter, from 51 percent in the year-prior period.

“We believe Sands China [Ltd] and Galaxy [Entertainment Group Ltd] stand to benefit from the market share shift to Cotai as we forecast 3 percent and 4 percent quarter-on-quarter EBITDA [earnings before interest, taxation, depreciation and amortisation] growth in the fourth quarter of 2015 fiscal, respectively, outperforming that of peninsula-focused operators,” added the Nomura team, referring to two of the Macau operators that already have major casino resorts on Cotai.

Brokerage Sanford C. Bernstein Ltd said in a note also on Monday that “Sands China’s product offering is one of the best positioned to capitalise [on] Macau’s paradigm shift” to mass-market entertainment.

“On January 21, 2016, the company [Sands China] announced its interim dividend of HKD0.99 [US$0.127] per share and we believe a further dividend will be announced in March. We estimate that 2017 and 2018 will see similar dividend distributions. Sands China has strong free cash flow generation and ample liquidity to support these dividend payments,” said analysts Vitaly Umansky, Simon Zhang and Bo Wen.

The US$2.7-billion Parisian Macao, a new Cotai resort from Sands China, is scheduled to welcome its first visitors “in the second half of 2016”, according to the firm. It will be themed around France’s capital and features a half scale replica of the Eiffel Tower, as well as 3,000 hotel rooms.

The brokerage said it expected Macau’s January GGR to decline by 18 percent to 22 percent judged year-on-year. 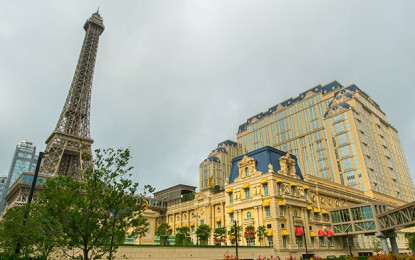 Hotel rooms at the Parisian Macao casino resort (pictured in a file photo) have been allocated for Macau-government use as quarantine accommodation amid the city’s response to a Covid-19 outbreak.... END_OF_DOCUMENT_TOKEN_TO_BE_REPLACED