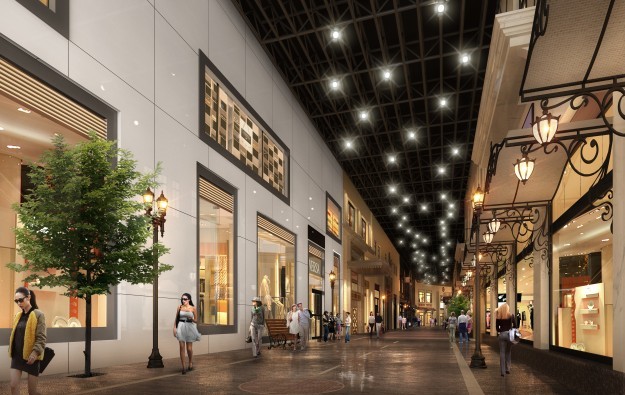 The majority owner of Studio City – a US$3.2-billion Macau casino resort due to open on October 27 – has announced the line-up of retail brands for its shopping mall.

It includes Macau’s first outlet from the Paris-based fashion brand Balmain, and what is said to be the largest store in Asia under the label of U.S.-based fashion designer Tom Ford.

A total of 55 retail brands – including luxury fashion names such as Fendi and Valentino; mid-market fashion brands such as Aeronautica Militare; and luxury pen and watch specialist Montblanc; as well as retail banks and food outlets – were announced in Tuesday’s statement by Asian casino operator and developer Melco Crown Entertainment Ltd.

The mall – called “The Boulevard at Studio City” (pictured in an artist’s rendering) – will cover 35,000 square metres (377,000 sq feet). It is a collaboration between Studio City International Holdings Ltd – a company in which Melco Crown has a 60-percent interest – and Taubman Asia, a subsidiary of U.S. mall specialist and real estate investment trust Taubman Centers Inc.

The Melco Crown statement said the shopping centre’s streets and squares have been inspired by “iconic shopping and entertainment locations”, including New York’s Times Square and Hollywood’s Beverly Hills.

“Times Square Macau”, inside The Boulevard at Studio City, will include holographic projections of musicians and film stars as a form of entertainment.

JD Clayton, property president at Studio City, described the facility as “a further world-class non-gaming attraction” for the resort.

The Boulevard at Studio City will also have a novelty experience for diners. A space station-themed “Cosmos Food Station” is said to combine a menu of popular dishes with tableside entertainment via a series of space travel-themed holographic projections.

Other non-gaming facilities at Studio City include a distinctive figure of eight Ferris wheel ride wedged between the resort’s two hotel towers and called the “Golden Reel”.

The property will also have: a 300-seat theatre, designed by American magician Franz Harary, as centrepiece of the resort’s “The House of Magic” shows; more than 4,000 square metres of indoor event space with a ballroom capable of seating up to 650 guests per function; a “Warner Bros Fun Zone”; and a virtual reality ride called ‘Batman Dark Flight’, based on the DC Comics character and Hollywood film franchise.

It is still unclear how many live gaming tables the Studio City casino will have when it opens. Deutsche Bank Securities Inc had mentioned in a note on July 31 the likelihood of Studio City being allocated 150 new-to-market tables by the Macau government. Lawrence Ho Yau Lung, co-chairman and chief executive of Melco Crown, said at a press conference on August 5 that he hoped Studio City could open with 400 gaming tables.

Studio City International Holdings on August 11 announced it was preparing  a “contingency plan” ahead of any gaming table allocation decision by the Macau government for the Studio City casino.

Analysts Anthony Wong of UBS Securities Asia Ltd and Robin Farley of UBS AG said in a note on August 5 that the 1,600 hotel rooms being opened at Studio City would be a 100 percent increase on the firm’s existing Macau room inventory at City of Dreams Macau and Altira Macau. They also said Studio City would add approximately 470,000 sq ms of gross floor area to Melco Crown’s Macau property portfolio.